Conference: Water will be difficult to ‘cross’ for India-Pakistan: experts

Conference: Water will be difficult to ‘cross’ for India-Pakistan: experts 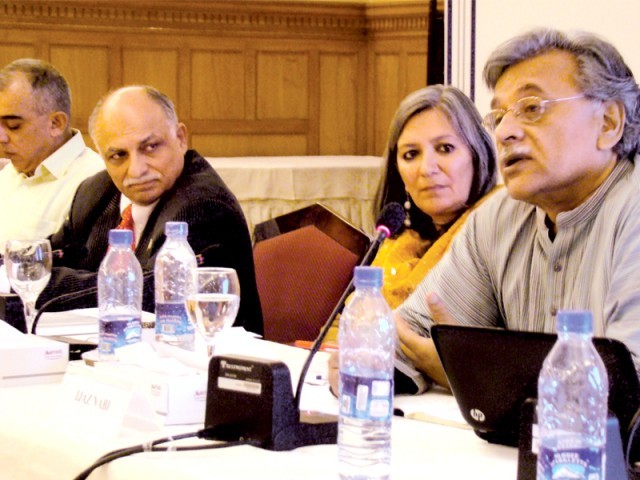 Delegates speaking at the conference. PHOTO: THE EXPRESS TRIBUNE

Water is going to be the dominant concern in talks between India and Pakistan, as Baglihar and Kishanganga have already altered the dynamics.

This was the view of delegates participating in the Islamabad Dialogue II, an Indo-Pak Track 2 conference organised by Jinnah Institute and Centre for Centre of Dialogue and Reconciliation.

The participants of the dialogue said water crisis in the Indus Basin is hard to exaggerate, given the heavy dependence on irrigated agriculture in Pakistan and India. Water stress presents serious challenges for growing population needs, industrialisation and development in the Indus Basin, said experts.

The group stressed that a demand efficiency focus needs to be developed and debated, as opposed to a supply oriented view. India and Pakistan need to cater to the ecological and environmental changes that are taking place in the region.

The dialogue was attended by policy experts, former diplomats, members of the media and academic communities from both sides. In a session on bilateral relations, participants stated that now is a watershed moment for both India and Pakistan.

Besides positive developments on trade, much more needs to be done to curb extremism within both countries, noted discussants from both countries.

They also agreed that the two countries also need to contain the violence threatening to spill out of Afghanistan in the lead up to ISAF/NATO withdrawal in 2014.

On trade, the participants agreed that Indo-Pak trade needs to look at regions and sub-regions in an attempt to connect both sides of Punjab and Sindh with Gujarat and both sides of Kashmir.

The conference delegates debated the ways in which trade integration was affecting small manufacturers under a liberalised trade regime, non-tariff barriers and improvement of commercial infrastructure.

Monsoons could wreak havoc if food insecurity not addressed: speakers