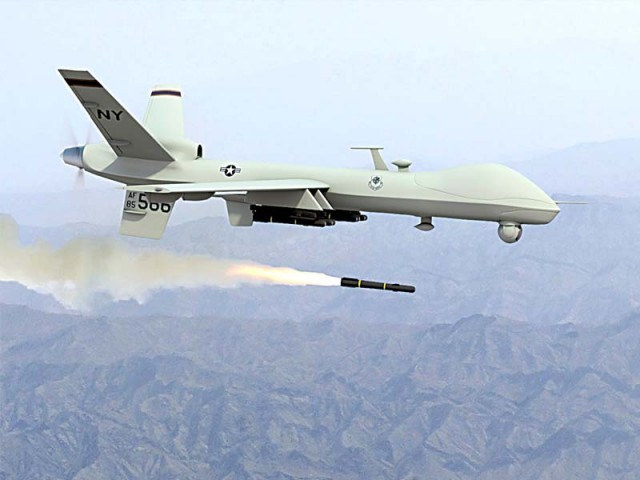 US drones regularly strike militant targets inside Pakistan, despite repeated protests by the government. PHOTO: FILE

Four missiles fired from a US drone killed at least 15 people in Mir Ali town in North Waziristan Agency on Monday – the third drone strike in three days and the deadliest this year, intelligence officials said.

There has been a dramatic increase in drone strikes in Pakistan since a Nato summit in Chicago ended two weeks ago without a deal on the vital Nato supply lines.

Security officials said two missiles slammed into a compound in Esokhel village, east of Miramshah, the capital of North Waziristan, before dawn. It brought the death toll from drone attacks in Pakistan in the past three days to 27.

According to a witness, the compound was razed to the ground and the bodies of victims were immediately buried after being pulled out from the rubble.

“I didn’t go near the house as I avoid going near locations where drone strikes take place,” the witness said, adding that in the debris, locals found letterheads of Tehreek-e-Taliban Pakistan (TTP), wooden beds, blankets and mattresses.

It was the third strike in consecutive three days in the region. Eight drone strikes have been reported in tribal regions since May 23, the same number as in the previous four months, and Monday’s was the deadliest since 18 TTP members were reported killed on November 16, 2011.

The London-based Bureau of Investigative Journalism has said that under President Barack Obama one drone strike has hit Pakistan on average every four days.

It said most of the 2,292 to 2,863 people reported to have died were low-ranking militants, but that only 126 fighters had been named.

It said it had credible reports of 385 to 775 civilians being killed, including 164 to 168 children. (With Additional input from AFP)