Natura­l gas will be Pakist­an’s safety net as we divers­ify our energy mix.
By Zeeshan Shah
Published: June 4, 2012
Tweet Email 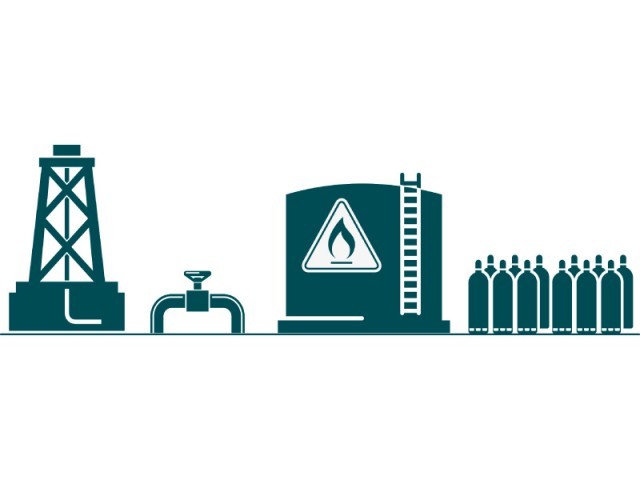 Natural gas will be Pakistan’s safety net as we diversify our energy mix. DESIGN: ALI DARAB

Energy experts have confirmed that natural gas today is fast becoming the next big thing in power generation as a cost-effective substitute for coal – which currently generates over 40% of the world’s electricity. Experts say that it is cleaner and emits 50% less carbon dioxide.

As Japan looks set to shut down nearly all its nuclear powered electricity plants after the Fukushima Daiichi nuclear disaster, times seem to be changing. Nuclear power may generate 20% of global electricity needs, but there are attendant costs of a possible nuclear meltdown that the world wishes to live without. In the coming times, many countries will follow in Japan’s footsteps – shutting down nuclear power plants and demanding better substitutes. Given this changing trend, natural gas seems to be a viable alternative for the power generation industry, as it is radiation free and comparatively less expensive.

Meanwhile, power demand is rising worldwide by close to 15-20%. With world crude oil prices skyrocketing, we owe most of our deficits to Arabs; these need to be eliminated on a priority basis if our economy is to grow unhindered. We need jobs and we need cheap energy – both are our long term challenges and both are complicating by the day.

Solar energy accounts for less than 1% of power generation in the US and elsewhere, as installation costs are much higher than similar natural gas or coal fuelled plants. Wind energy accounts for close to 3%, much for the same reasons. In today’s capital-intensive business world, it takes longer for a business to reach economies of scale as technology generates benefits in the long term.

As the world goes tech-savvy, the electrification cost for every new gadget with a battery bought in the country goes up. Everything – from iPads to laptops and cellphones – constantly pushes up demand for electricity. Today in America there is a constant debate on what these essential tools will be powered by in the future.

So what is the future of Pakistan? Will our search for fuel be satisfied with the TAPI and IP gas pipelines? If we go independent on these projects, we may later realise that we are sitting on top of a jackpot that may make us a giant in the global energy trade; while also erasing all our trade deficits. Not to mention billions of dollars in potential revenue and millions of jobs.

As a highly profitable source of cheap energy, the future belongs to natural gas. Any good portfolio manager today will suggest diversification: hold onto wind and solar energy, but focus meanwhile on natural gas to average out the cost of doing business and running homes, offices, schools, factories, cars – and that too at a lower environmental cost.

Following this reasoning, China is gearing towards global dominance in the real sense as it spreads its energy needs over coal, LNG, wind and solar power. India is moving in at a close second.

Russia is keen to support us in energy exploration options and invest in our country. All Pakistan needs is a focus on self-reliance: with Chinese support secured and Iran and Turkey next door, the doors to abundant fuel supplies seem wide open. We should invest with an aim to diversify profits and multiplying them, with the net effect of healing the ailing economy of our nation-state.

By 2015, Pakistan’s mission should be to become the largest exporter of energy around the globe, with Thar Coal and the TAPI pipeline as our lifeline. The ambition can be fulfilled if we operate sensibly. We should invest in energy now to profit ahead. We should aim to be the Saudi Arabia of natural gas. Natural gas will provide the juice to turn Pakistan into one of the largest energy producers, and eventually designate us as the saviours of the coming generations; the ultimate sanctuary for the world’s corporations and a haven for our people.

We can improve billions of lives and make billion of dollars while we’re at it.

THE WRITER IS A BANKER AND BROADCASTER FOR FM91