Pakist­an is now realis­ing that there is a limit to how much it can go on playin­g the “frontl­ine state” card.
By Editorial
Published: June 3, 2012
Tweet Email 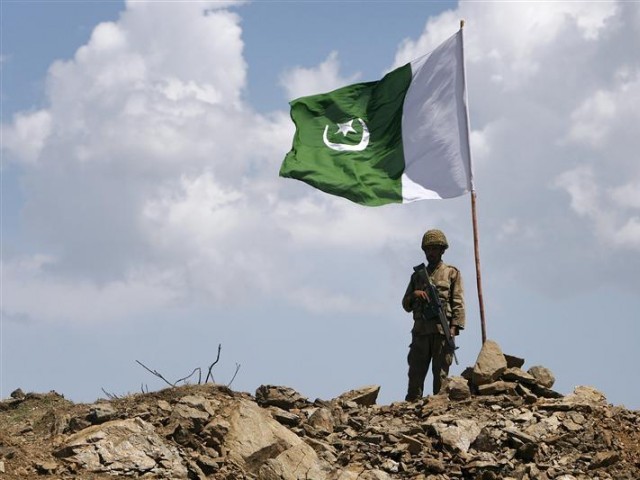 Pakistan is now realising that there is a limit to how much it can go on playing the “frontline state” card. PHOTO: REUTERS

Speaking in Karachi on May 31, President Asif Ali Zardari said that “disengagement with the world was not a democratic option”. In the next breath, however, he asked “the international community to also take Pakistan’s domestic compulsions and national interest into account when taking stock of the country’s role in efforts against extremism and terrorism”. He then explained why Pakistan painted itself into a corner at the Chicago Summit: the government had to change the policy decision of opening the Nato supply route “because the Salala incident had necessitated a review”.

Pakistan first played up the Salala incident and demanded an apology, but when it got close to getting one, the ‘honour’ hype overwhelmed the country. Parliament took its time deciding what to do, while the politicians fulminated against the US and encouraged the media dogs to unleash themselves. Where did the “democratic option” go then? Thereafter, other unanticipated factors intervened: US President Barack Obama got sensitised over the apology in the midst of his re-election campaign; and the Pentagon’s disagreement over his Pakistan policy became intense. The Pakistan Army, seeing the aggressive approach of the US to the renegotiated rates of the supply route, has now allowed the American trainers — it had kicked out in a moment of dudgeon — to return.

Isolation is something that a state has to think about as a cornerstone of its approach to the world. This, in turn, depends on an objective assessment of the state’s importance in the international community. Any ‘outward’ approach will also depend on these ‘inward’ factors: the state of the national economy and the state of law and order. When considering these factors, a country is forced to change its stance and embrace realism. Pakistan is not like Iran and cannot afford to roar like a lion when, unlike Iran, it is sunk in a colossal energy deficit. After the national paroxysm against ‘unfair’ treatment, Pakistan is now realising that there is a limit to how much it can go on playing the “frontline state” card and telling the world it cannot move an inch on Afghanistan unless Pakistan’s spoiler’s role is recognised and it is accordingly appeased.

Whether we like it or not, Pakistan has prospered when it avoided isolation or was placed in a non-isolationist situation by happenstance during the Cold War. By going jihadi and nuclear at the same time it now puts a lot of store by ‘honour through isolation’. Just look back and see the pattern of past behaviour: after the Cold War ended, Pakistan was most at risk of clutching at isolationism for emotional satisfaction. The success of General (retd) Pervez Musharraf during his ‘high growth’ tenure occurred in sectors where Pakistan was linked to the outside world. In 1998, the country fell into a trough of global isolation after conducting the nuclear test. Despite promises of assistance from friends in the Middle East, Pakistan was soon faced with default and prospects of what was then termed a ‘failed state’. Breaking out of a period of isolation, which included turning off the tap of jihad and normalising relations with India, Pakistan embarked on a foreign policy that helped its economy to rise from its dangerously low growth rate to reach its highest growth rates by 2005. All that, of course, is now reinterpreted as a ‘phase of Pakistan’s slavery’.

Foreign Minister Hina Rabbani Khar tried to break out of this latest phase of lethal isolation by saying that Pakistan was faced with alienating, not only the US, but also scores of other nations taking part in the Nato operation in Afghanistan and that Pakistan could not afford to offend them all. But then, the PPP got scared of offending the ‘nation’ on the eve of another election, which it hopes to win despite its abysmal governance. It has plumped for a warlike gesture of national honour. President Zardari should know that elections cannot be won through false bravado and by ignoring the economic plight of the people. No one is going to vote for the incumbent government just because it stood up on its hind legs and snarled at the rest of the world.

Who is the budget for?