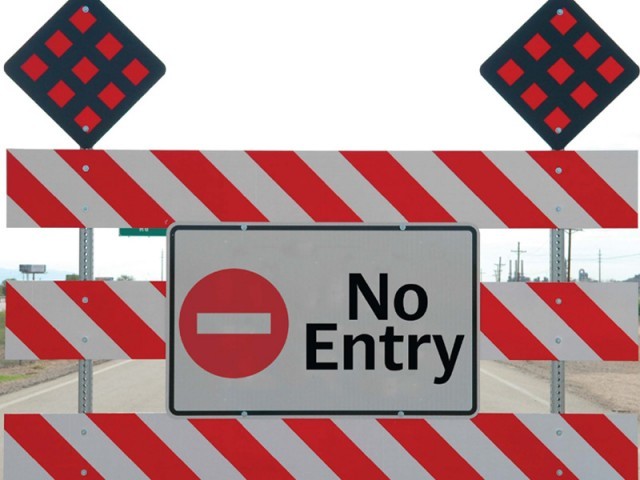 PESHAWAR: The government of Khyber Pakhtunkhwa has issued new instructions to the provincial administration for prohibiting members of foreign missions from visiting prohibited areas in the province without obtaining proper No Objection Certificates (NOC).

In case any member of foreign mission is found traveling to the prohibited areas without the requisite NOC, they may be asked to turn back respectfully, an official statement issued by the Home and Tribal Affairs Department concerning latest policy on interaction with the foreign missions in KP here on Thursday.

The new instructions have been conveyed to Inspector General Police, all divisional commissioners, capital city police officer and all regional police officers.

The notice made it clear that K-P was divided into open and prohibited areas for foreigners. It said that for open areas, heads of missions, their spouses and children can move after notifying the relevant quarters in the Ministry of Foreign Affairs 24 hours in advance. Diplomats can travel in these areas through ha 48 hour notice.

The notice also said that diplomats, councilors, and members of diplomatic missions cannot carry weapons unless given express permission by the government.

They are also required to submit list of all properties hired, complete with documents including lease and rent agreements.

Salient feature of these instruction are as under:

1. The country is divided into open and prohibited areas. For open areas the head of mission, their spouses and children are allowed to move by notifying ministry of Foreign Affairs 24 hours in advance.

2. All other diplomats can travel free to the open areas by intimating ministry of foreign affairs 48 hours in advance.

4. No diplomat/ councilors members of diplomatic/ councilors mission is authorised to carry weapons unless is specifically permitted by the government of Pakistan for which a license would be issued.

5. All foreign mission have been requested to provide complete information to the foreign office about any weapons in their possession forthwith.

6. Any undeclared weapon found thereafter should be confiscated by the law enforcing agencies,

7. The law enforcing agencies are advised not to enter the vehicle of diplomatic mission but asked the passengers to hand over the weapons to them.

8. The weapons after confiscation may kindly be reported to the concerned police authority for lodging a FIR against the person carrying the weapon.

9. In case the passengers of the vehicles refused to follow the rule of the host country, the law enforcing agencies may proceed against as per the land of the law of the land. It may however be ensured that diplomats have to be treated with utmost respect that they should not be searched, man handled or addressed in rude manner.

10. In accordance with the Vienna conventions all foreign mission are required to provide a complete list of all buildings/properties hired by them for residential and official purpose at any city in Khyber Pakhtunkhwa. They are also required to provide the ministry of foreign affairs with the copies of rent/ lease agreement of the rented premises at once.

12. Any property which the mission failed to notify to the ministry of foreign affairs shall not be treated as diplomatic/councilors premises and consequently shall not enjoy any diplomatic immunity under the Vienna conventions.

13. Detailed policy on renting of houses to foreigner in Khyber Pakhtunkhwa is being notified separately.

In Swat, a delectable reason to be in primary school