The farce of tribal jirgas

The farce of tribal jirgas 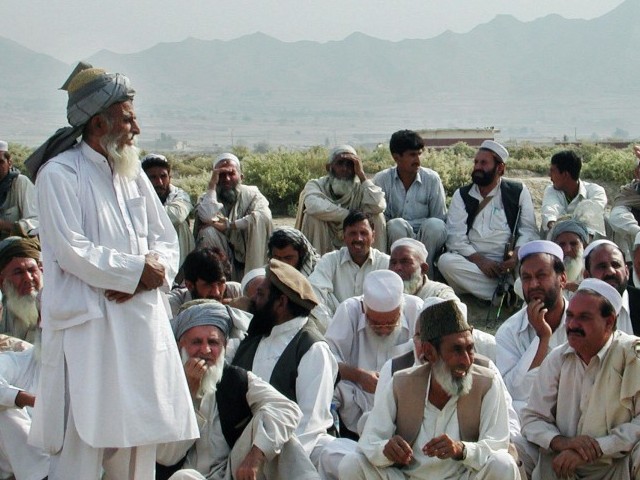 Tribal law is traditionally without ‘due process’. It is called ‘quick justice’, often condoned with the adage ‘justice delayed is justice denied’ and wrongly equated with Islamic sharia. PHOTO: AFP

A tribal jirga in Kohistan in the Hazara division of Khyber-Pakhtunkhwa has done something that reminds us of the days of the Taliban rule in Afghanistan and gives us a glimpse of a future Pakistan impacted by growing intolerance and bigotry. A tribal council of elders has condemned four women and two men to death for “staining the honour” of their families. A video presented to the jirga purported to show the alleged crime of  ‘mixing’ of the sexes in violation of the law of  ‘gender segregation’ during a wedding party while the accused allegedly dancing together.

After this shameful episode of  ‘rough justice’, the convicted men fled the scene while the women were caught and locked up in a room in preparation for their execution. The Hazara administration is shocked by the  ‘trial’ by jirga and the indifferent nature of the evidence presented for conviction: the video coverage actually shows the ‘convicts’ singing and dancing separately but they are shown in a single sequence. The reason behind this farce was not difficult to locate. It was a rival’s scheme to destroy a stronger and more affluent family. A member of one of the victim’s family stated: “Since our family is affluent and owns vast acres of forestland, orchards and agriculture farms in the village, our rivals hatched a plot to deprive us of them”.

Since Kohistan of Hazara is a tribal area, ostensibly there is nothing one can do about what has happened. There was no defence for the poor women who could not run away like the men, which reminds us that even the trial conducted by an official of the Khyber Agency recently condemned Dr Shakil Afridi for treason without giving him the right to defend himself. The cruel fact in Hazara is that a jirga, not an officer, has delivered the verdict and the victims are lucky that the sentence was not summarily executed. The jirga, however, has provided for that: It has tasked 40 young men to kill “the fornicators” and the tribe has raised a fund of Rs400,000 for litigation that may ensue once the local administration has taken cognisance of the shameful matter.

Tribal law is traditionally without ‘due process’. It is called ‘quick justice’, often condoned with the adage ‘justice delayed is justice denied’ and wrongly equated with Islamic sharia. What jirga means in essence is a kangaroo court, in which the local influentials satisfy their instinct of vengeance and avarice. Pakistan has kept its tribal areas under a special dispensation where justice through jirga is legally recognised. In the settled areas also, there is a tendency to bypass the legal system under the Constitution through the panchayat. The panchayat is illegally functioning in Punjab and one cannot forget what happened to Mukhatran Mai when a powerful tribe got her gang-raped through an illegal council of elders some years ago; even the Supreme Court could do nothing to undo the horrible bestiality visited on her.

The Taliban unleashed what they said was Islamic justice on Afghanistan, for nearly a decade, with the help of Pakistan and Saudi Arabia, which recognised the Taliban government while the world shrank in horror. After the Taliban were gone, the Afghans expressed hatred of them by up to 85 per cent in an opinion survey. In Swat, the people were uninstructed in the requirements of justice and favoured the ‘quick justice’ they equated with Islam till they were brutalised by the warlord Mullah Fazlullah who was imposed on them by the Tehreek-e-Taliban Pakistan that was established by the al Qaeda. When Fazlullah was finally ousted by the army, the people of Swat realised their error and repented. The Hazara-Kohistan jirga has used the jargon of na-mehram from Islamic jurisprudence to shield itself.

The truth is that Pakistan is being ‘re-tribalised’ under the influence of growing Talibanisation. Kangaroo courts are functioning in Pakistan’s vast ungoverned spaces where the state once nurtured its deniable jihadis. They are also raising their ugly heads in Punjab and Sindh because of the retreat of the state from its constitutional jurisdiction.

Sorting out the mess in Balochistan