Militant charities versus US aid

Militant charities versus US aid

The US has announ­ced anothe­r $20 millio­n, a day after the TTP offere­d to match the amount.
Published: August 12, 2010
Tweet Email 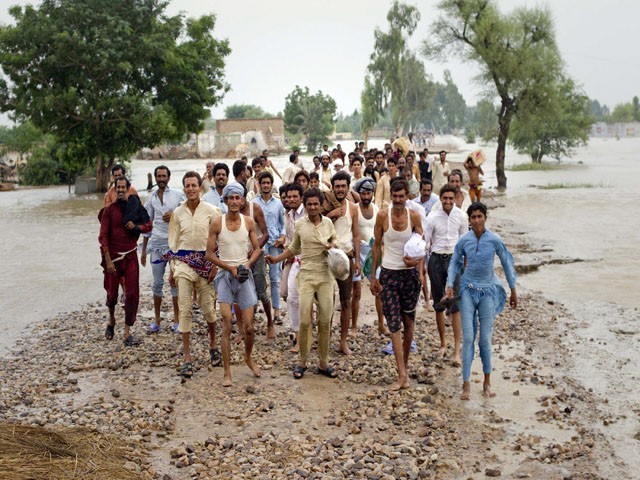 The US has announced another $20 million in aid for flood survivors, a day after the Tehreek-i-Taliban Pakistan (TTP) offered to match the amount if the Pakistani government rejects American aid.

A competition seems to have started between the US, which is stepping up cooperation to win support in Pakistan, and Islamic charities, who the US believes have links to militant organisations. The total amount in aid that the US has so far sent to Pakistani flood survivors is $55 million, including 436,000 halal meals and 12 pre-fabricated bridges as a number of bridges have been washed away in the floods, particularly in Khyber-Pakhtunkhwa where the floods caused the most devastation and where Islamic charities are most involved in relief efforts.

“We are providing food, clothes, medicines, tents, utensils and Rs5,000 in cash to each family. So far, we have helped 250,000 people,” Atique Chohan, spokesperson for the Jamaatud Dawa (JuD) in Khyber-Pakhtunkhwa, said at a camp in Nowshera.

Banned in Pakistan and on a UN terror list, JuD is one of a number of Islamic organisations that have been highly visible in the battle to help provide relief to millions of survivors. The JuD has especially set up a welfare organisation called the Falah-e-Insaniat Foundation. JuD chief Hafiz Mohammad Saeed is considered a terrorist in India and by the UN. He founded Laskhar-e-Taiba, the Kashmiri militant group outlawed in Pakistan and blamed for the 2008 Mumbai attacks that left 166 people dead.

These Islamic charities have moved faster than the government and the latter’s perceived failure seems to have increased support for the former.

“The government gave us tents and nothing else. All goods here have been supplied by affluent and ordinary citizens. We’re getting help from private organisations,” said Jahanas Khan, 50, who was uprooted from his village.

“Aid from the US and international NGOs can have a tremendous impact but can also go unnoticed by people on the ground who have no idea where it came from,” said Anthony Cordesman, an expert from the Center for Strategic and International Studies in Washington who has advised the Obama administration on Afghanistan and Pakistan.

This seems to ring true for civil servant Aurangzeb Khan, 43, who dropped money into a half-filled transparent glass donation box at the JuD camp in Peshawar. “I would have given it to the government had it done a good job,” he said.

The support seems to have rung alarm bells for the UN as well. The UN’s aid envoy to Pakistan warned on Wednesday that armed militants could take advantage of the country’s worst humanitarian disaster by operating among its displaced victims.

“We all hope that militants will not take advantage of the circumstances to score points by exploiting people driven from their homes by the floods,” Jean-Maurice Ripert, told Le Monde. “The people’s misery can always be exploited by those who have political or militant aims,” the newspaper quoted him as saying.

His comment came in response to a question about reports that some local aid groups working for the victims in Pakistan had links to extremists. “For us, the essential thing is to help the Pakistani authorities to work together, set priorities and implement them,” Ripert said. “That is the best response to make to those who want to use the catastrophe for other purposes.”