The artist’s latest work is on displa­y at Khaas Art Galler­y in Islama­bad.
By Sehrish Ali
Published: May 23, 2012
Tweet Email 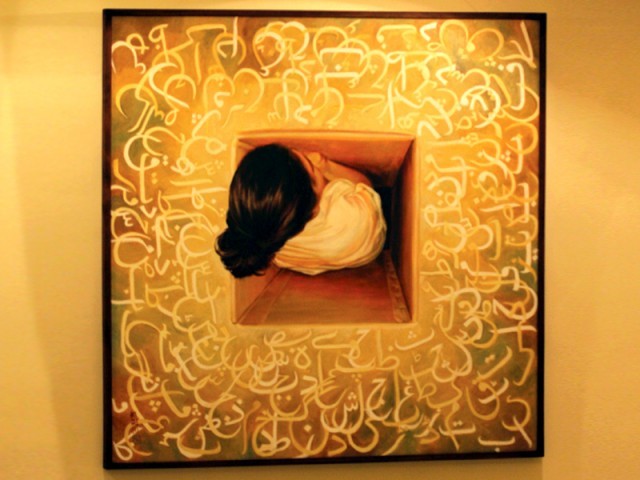 Karachi-based artist Masuma Halai Khwaja showcased her second solo exhibition, ‘Life is a Song, in Islamabad’s Khaas Art Gallery on Tuesday. Her latest work, which explores the ideas of self and collective identity, of freedom and captivity, of perceptions and reality, is a treat for art lovers.

Each of her 16 pieces is titled after various songs. However, before you assume this is a peachy colourful sing-and-dance art display, think again. Using print on canvas, paint and even embroidery, the artist makes statements that are strong and undeniable. Using herself as the muse, Khwaja paints the lost self-identity of women in our “strict and conservative” society.

With a tinge of satirical humour in her work, Khwaja uses rose petals in some of her paintings, denoting how these petals have various symbolic meanings in our society; “Rose petals in our society are used both in mourning and in happiness, hence I’m confused. I add these petals as I don’t know whether to rejoice that we are an independent country or mourn at the current state of affairs,” says the artist. If that’s not enough, the use of roses floating on water with the reflection of a man holding a Pakistani flag also has a deeper hidden message. “The roses are placed in a shape of the Kabala Jewish sign,” she states, highlighting the multiple, hybrid religious and cultural traditions in the country.

Amongst all her artworks showcased at the gallery perhaps the strongest ones are those with disturbing newspaper headlines printed on a canvas in the shape of women completely veiled from head to toe in a burqa. “It’s because I feel that the conservatives want to force everyone to conform to their school of thought,” explains Khwaja. The use of text also creeps into her work regularly; Urdu, English, Gujrati and even Hebrew are spewed across the canvas, sometimes in a random fashion and sometimes to create figures.

Another striking painting was a large oil canvas of herself, confined in a constricted box with text and letters around her. It depicts her personal struggle to break through the norms of Pakistani society. While her work remains strong and very provoking, Khwaja’s use of colours remains soft and pastel, which in turn makes her work stand out more.

The exhibition, which is the last one of the season at the Khaas Gallery, continues till May 31. The gallery will close down for a few months during the summer, with the new season beginning in September.