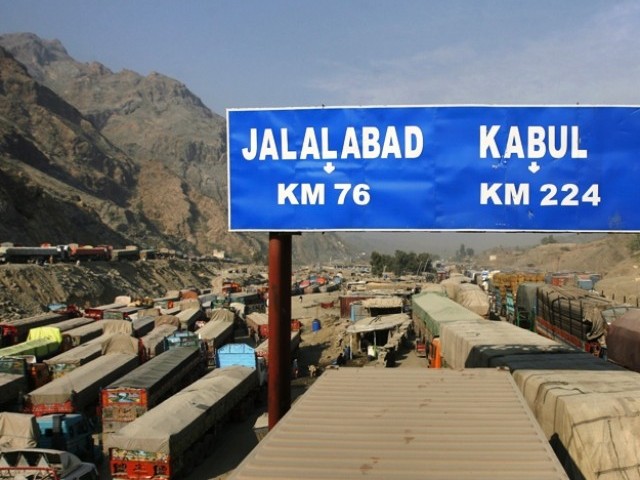 The supply routes had been suspended after the killing of 24 Pakistani soldiers during an air raid last year on border posts located in Mohmand Agency. PHOTO: REUTERS/FILE

Pakistan is all set to gain $365 million annually under an agreement after the reopening of supply routes for North Atlantic Treaty Organisation (Nato) troops in Afghanistan, a report on The Christian Science Monitor website has revealed.

The Defence Committee of the Cabinet (DCC) had earlier given a go-ahead to lift the six-month old blockade on Nato supplies passing through the country. The supply routes had been suspended after the killing of 24 Pakistani soldiers during an air raid last year on border posts located in Mohmand Agency.

The United States-led (US) coalition is expected to pay Pakistan a fee of $1,500 to $1,800 for every truck carrying supplies through the country. Officials, speaking on the condition of anonymity, said that the bill is estimated to go up to $1 million per day.

Officials in the US have said that they are not aware of how much cost they will have to bear.

The US, in return, has asked Pakistan to provide security for the supplies which are transported using private local companies, faster customs clearance and checkpoints, reveals the report. Pakistan has not provided security to trucks carrying Nato supplies in the past.

It is estimated that as many as 600 trucks will pass through Pakistan every day between now and next year.

Rasmussen had later extended an invitation to President Asif Ali Zardari. The presidential spokesperson had insisted that the invitation was unconditional and not linked to the opening of Nato supply routes or to any other issue.

Pakistan has also repeatedly demanded that the US issue a formal apology for the raid, while Washington has only expressed deep regret and offered condolences on the killing of Pakistani troops.

The demand for an apology has been the bone of contention between Pakistan and the US for reopening the supply routes. Acting Assistant Defence Secretary George Little had earlier said that the US was still noncommittal to a Pakistani demand for a formal apology.

Many set to gain from reopening of supply routes

Traders of looted goods, the military and militants in tribal areas are all set to gain from the reopening of supply routes.

A report in The Washington Post states that local transport associations have revealed the military indirectly controls 30% of Nato oil tanker contracts. The military had declined to comment on its share.

Traders of looted goods had earlier experienced a downward trend for their business, but are now expecting a boost. A trader who spoke to The Washington Times said that he was selling food, daggers, computers, technological goods and American flags at reasonable prices.

He said that suspension of supply routes had made it hard to meet expenses, but the reopening will be beneficial.

Militants in the tribal area too will benefit once supply routes reopen. They are known to demand protection money from transport companies and also attack trucks to steal the goods.