‘Taming of the Shrew’ with a desi twist

‘Taming of the Shrew’ with a desi twist

The local rendit­ion of the Shakes­pearea­n play premie­res in Lahore.
By Sher Khan
Published: May 11, 2012
Tweet Email 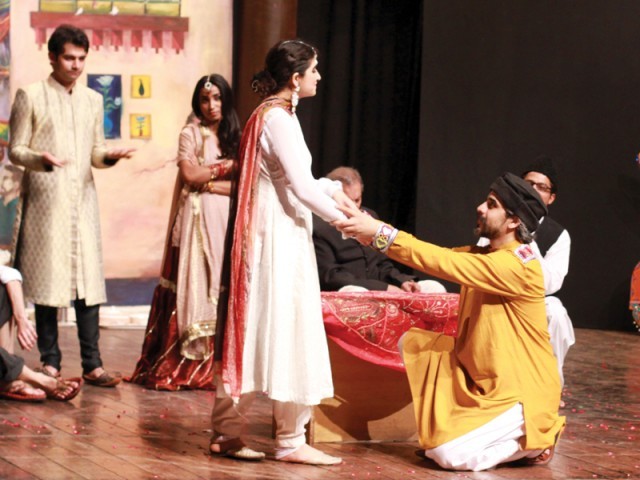 The play will be performed at the London Globe to Globe festival on May 25 and 26. PHOTO: REHAN KHAN

The much-awaited premiere of the Urdu rendition of the Shakespearean play “Taming of the Shrew” or “Ilaaj-e-Zid Dastayaab Hai”, took place on Wednesday night at the Alhamra Arts Complex in Lahore.

After facing several challenges, the teaser, which was showcased to the local audience, revealed why the troupe, Theatre Wallay, has been selected from 37 different countries for the London’s Globe to Globe festival scheduled for later this month.

Although, acclaimed actor Nadia Jamil, who was due to play one of the lead roles (Kiran), fell ill at the last minute, the production found a savior in Maria Khan who agreed to replace Jamil for the premiere. The production provided a progressive outlook on theatre, characterised by its bold structure and overall scripting of the play. To add to the mood, rock band Mekaal Hasan Band provided live background music.

“The Taming of the Shrew”, which is widely believed as one of Shakespeare’s more misogynistic plays, has been cleverly adapted to suit the local audience. Translated in Urdu, the adaptation took nearly four months to complete. “The original play had elements of misogyny, so what we have done apart from adding local flavor is that we have created an interesting dynamic in which both the male or female characters are shown strong and neither of them is expected to bow in front of the other,” says Osman Khalid Butt who plays the role of Hasnat, a rich, flamboyant boy in the play.

The story revolves around a father who wants to marry off his two daughters. While Kiran, the elder daughter, is shown as a stubborn and independent-minded girl scaring off many potential suitors, the younger daughter, Beena (Karren David), is seen as a catch: attractive and submissive. As is the case in many local families, the father, Mian Bashir (played by Salman Shahid), doesn’t allow the younger daughter to get married until Kiran is married first.

This is when Umair Rana steps in. Playing the role of Rustam Khan, a Mianwali Pathan who is willing to marry anyone for money, he decides to marry Kiran. This scene cleverly depicts how certain biases about men and women are embedded in the society. This addresses the issue that it’s completely acceptable if a man decides to marry a girl just because of her money but when a woman does the same, she is looked down upon. “There are harsh expectations from women in our society; they are expected to be obedient to their husbands, fathers and brothers and then the society also imposes religiosity and morality on them,” says Rana.

As the story builds up, Rustam is shown forcing Kiran into becoming an obedient wife. His cruel attitude towards her — he refuses to give her food, clothes — leaves Kiran in an isolated place where she has no choice but to become subservient to her husband. Hence, the play seeks to question the role of a wife and the sacrifices she is required to make to survive in society and make her marriage work.

Overall, the thematic overtones combined with the talented cast allow for the story to develop and adequately show the potential richness of theatre in Pakistan. “Theatre, which is done not just for commercial purposes and is of good quality, is welcomed,” says veteran actor Salman Shahid while adding that, “it’s always very important to promote theatre.” Equally impressed and moved by the performances, producer Susannah Harris-Wilson stated, “With talent like this, there must be a national theatre company in Pakistan.”