Interi­or minist­er says he had given up his Britis­h citize­nship before taking up public office.
By Our Correspondent
Published: May 11, 2012
Tweet Email 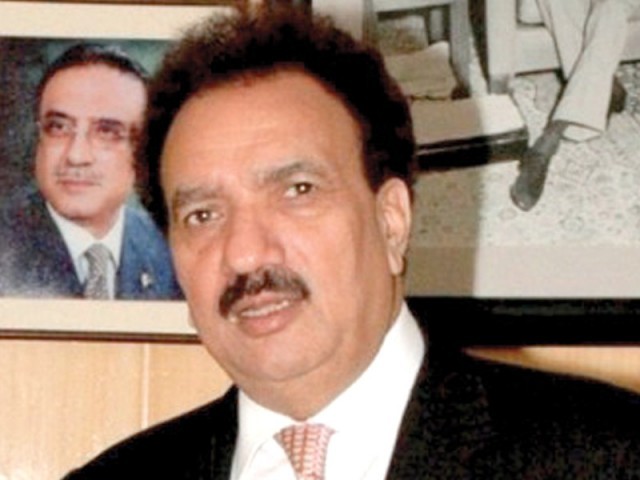 Interior minister says he had given up his British citizenship before taking up public office.

Interior Minister Rehman Malik claims he has given up his British nationality, but insisted that holding dual nationality is not a crime under Pakistani law.

The interior minister, now with the prime minister in London, had submitted a written statement through Attorney General Irfan Qadir before a two-judge bench of the apex court.

Malik said he had given up his British nationality on March 25, 2008, before holding public office.

Chaudhry said that since his client is currently on an official visit to the UK, he will discuss this issue with him on his return. The chief justice advised Chaudhry to ask Malik to procure relevant certificates from the British government to support his defence.

The Supreme Court on Wednesday had issued notices to parliament to provide a list of members who held dual nationality, and reissued summons to Rehman Malik, and MNA Farahnaz Ispahani to explain whether they have dual nationality.

Earlier, while explaining the circumstances surrounding his British nationality, Malik stated, “it may be informed that by virtue of my continuous exile in UK for nine years due to political victimisation and life threats in Pakistan, which is a matter of public record, I was granted British nationality but I never gave up my Pakistani citizenship as dual nationality is allowed under Pakistani law.”

The court was also informed earlier through an application that it has no jurisdiction to hear the case of dual nationality. The court, however, did not entertain that application and had asked Malik to reply with a yes or no answer to the court’s question.

Mian Rauf, counsel for MNA Zahid Iqbal, told the court that the British government has only granted permanent residential status to his client and that Iqbal retains his Pakistani nationality. The court asked him to appear at the next hearing on May 16.

Despite being issued summons, neither MNA Farahnaz Isphahani, nor her legal representative appeared before in the court.

The court asked her to engage a lawyer before the next date of hearing.