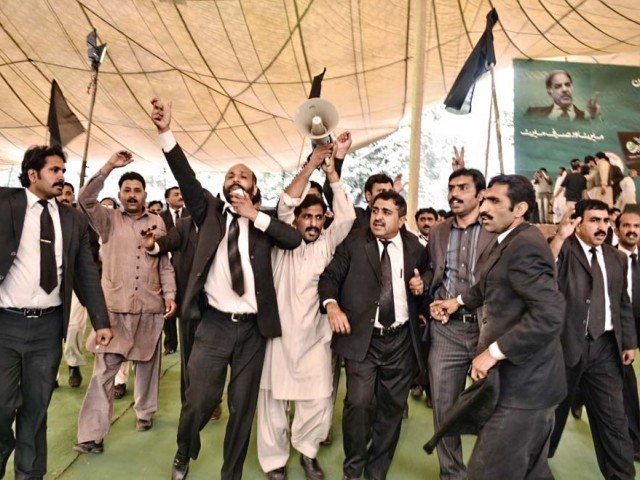 Witnesses said that a group of more than 20 lawyers thrashed the ASI while he was waiting outside a courtroom for a hearing.

There were three scuffles at the sessions court on Wednesday, bringing the number of such incidents – since April – to fourteen.

On Wednesday, an assistant sub-inspector of Green Town police was beaten up, a lawyer and his clients beat up a female lawyer and parties to a custody case scuffled with each other.

Witnesses told The Express Tribune that a group of more than 20 lawyers thrashed ASI Zohaib Ali Awan while he was waiting outside a courtroom for a hearing. The lawyers allegedly abused the ASI and when he told them to stop, they beat him up. The police official’s uniform was also torn, said witnesses.

Islampura SHO and DSP reached the court after coming to know about the incident. A lawyer familiar with the matter said that the officials and some lawyers, including Lahore Bar Association vice president Rana Javed Bashir, had tried to settle the matter but the ASI refused to sign a ‘settlement’, which said that he had forgiven the lawyers for beating him up.

Idrees Qureshi, the Islampura SHO, said that a case had been registered against Advocates Abdur Rasheed and Shahid Raseed and 25 other lawyers under Sections 186 (Obstructing public servant in discharge of public functions), 365 (Kidnapping or abducting with intent secretly and wrongfully to confine person), 342 (Punishment for wrongful confinement) and 506 (Punishment for criminal intimidation) of the Pakistan Penal Code (PPC).

Talking to The Express Tribune the ASI said that he did not know why the lawyers had beaten him up. He said he had met them for the first time on May 7, when they had come to the police station for the release of a man, Zafar, suspected of land grab. On May 8, he said, Zafar had again visited the Green Town police station and had been sitting in the moharrar’s room when a bailiff – deputed at the request of Advocates Abdur Rasheed and Shahid Rasheed – came to have him released from ‘illegal detention’. The ASI said that the police told the bailiff that Zafar had come to the police station to inquire about a matter but the bailiff had directed them to come to court the next day. Awan said that he had been waiting outside the court where the matter was to be heard when the aforementioned lawyers started thrashing him.

In the other incident, Advocate Ishrat Ara registered an FIR against Advocate Rana Arshad and his clients Nabeela Bibi, Sakina Bibi, Abdul Ghani, Abdur Razzaq and Aslam at the Islampura police station under Sections 379 (theft), 506 (criminal intimidation), 147 (rioting )and 149 (Every member of unlawful assembly guilty of offence committed in prosecution of common object) of the PPC.

She alleged that the suspects had beaten up her and a colleague, Samina Kashif, without any provocation when they were waiting outside the court room of Additional District and Sessions Judge Mahrukh Aziz Tarar.

When contacted, Arshad said that it was Ara and Kashif who had assaulted Nabeela. He said that his client Nabeela had been raped by ASI Fatah Sher, the husband of Advocate Ara. An inquiry by DIG Mubasharullah had found Sher guilty, he said, and an FIR had been registered against him. On Wednesday, Arshad said, Ara assaulted Nabeela. Asked if he had beaten up Ara, he said, “Yes. I hit her when she continued to beat Nabeela even after I intervened.”

In the third incident, two parties scuffled with each other outside the court premises. Islampura police arrested two men.

According to the police, Zarrina Bibi had filed a habeas corpus petition against her husband Muhammad Saleem and another man, Muhammad Azeem, alleging they had abducted her 8-year-old son Abdullah. Police said that the scuffle happened after they had attended that day’s proceedings.