Plans to take off in the next three months.
Published: May 6, 2012
Tweet Email 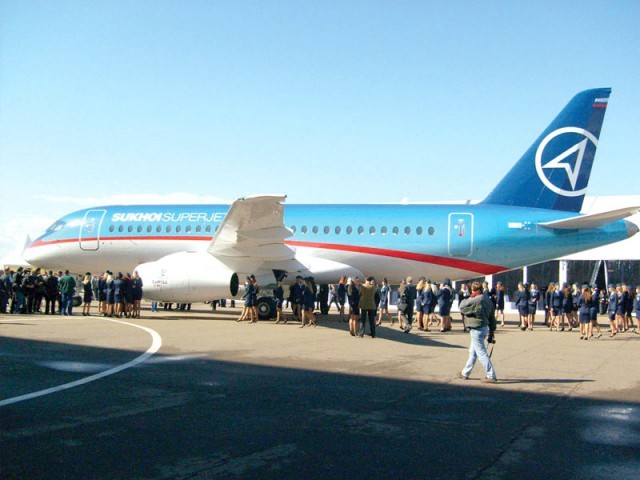 Air Indus Pvt Ltd, a fresh entrant into the Pakistani aviation industry, is interested in acquiring three Russian manufactured Sukhoi Superjet 100 aircraft, as declared by the company. A representative of Sukhoi Aviation, Igor Syrtsov, shed light on various features of the aircraft Sukhoi Superjet `SSJ 100’ during the road-show at Karachi Airport.

He pointed out that Sukhoi Superjet 100 is a modern 100-seat jet. Igor was of the view that the recent European certification confirmed full compliance of the aircraft with stringent safety requirements.

Chairman Air Indus Private Limited Abdul Wahab remarked “I have seen the Sukhoi Superjet 100 and it is as good as any other jet made in Europe”. The airplane manufacturer Sukhoi also pledged to help the airliner in getting finances for these aircrafts, he claimed. Wahab added that the three aircrafts will be delivered by the middle of next year with the provision of financing facility and Air Indus will also have an option to further acquire five aircrafts in the next three years.

Last year, as reported by the Civil Aviation Authority (CAA), the airline contracted four Boeing 737-300 aircraft from a Bulgarian company and Air Indus Private Ltd will start its operation in the next three months, using the narrow bodied American aircraft.

As PSEB dallies, IT Park project in jeopardy