Turning up the heat: Inflation soars to eight month high

Turning up the heat: Inflation soars to eight month high

Massiv­e increa­se in fuel prices acts as a cataly­st in April.
By Shahbaz Rana
Published: May 3, 2012
Tweet Email 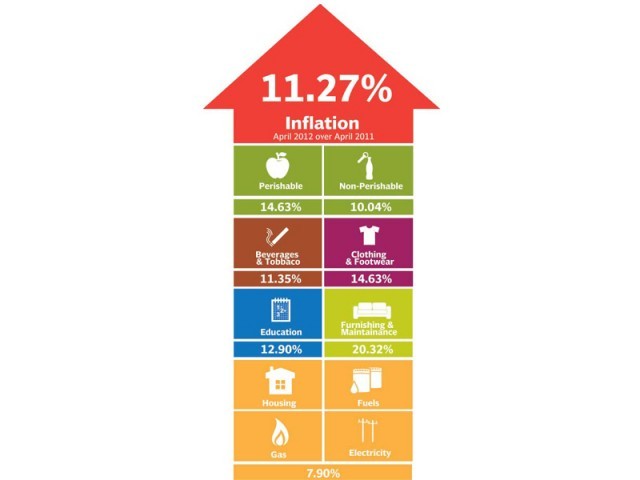 The increase in fuel prices have stoked inflation which clocked in at 11.3% in April, the highest level in eight months, according to the latest official statistics released on Wednesday.

“The impact of increase in energy prices have started appearing in the index and also surged the monthly jump by 1.83% in April over March – the highest in 14 months,” said Sohail. The last time there was such a massive monthly jump was in September 2010 when it rose 2.1% due to the devastating floods that choked the food supply chain in the country.

There was an increase of 18.4% in prices of housing water, electricity, gas and other fuel groups in April over a year ago, according to statistics released by Pakistan Bureau of Statistics (PBS). The group has 29.41% weight in overall CPI basket. The transport group prices, having 7.2% weight in CPI basket, increased 28.8% in the same period.

He, however, went on to say that despite resurgence the government will be able to achieve its annual average inflation target of 12%, as average inflation during the first ten months, July 2011 to April 2012, remained at 19.40%.

Last Thursday, the PBS rebased the economy from 1999-00 to 2005-06 that has trigged a widespread controversy. It not only decreased the size of the economy by Rs2.5 trillion but also caused less than expected economic growth in the outgoing fiscal year.

Amid calls of suspending Secretary Statistics and PBS Director General Arif Cheema, Sohail Ahmad responded for the first time to accusations saying that he did the job without proper consultation and approval of the competent authority.

“Due to time constraints and issue in seeking time for holding a meeting of PBS Governing Council, we decided to go ahead and rebase the economy,” said Sohail. He said the Governing Council will meet on Friday to review the national accounts.

He maintained that few years back the Central Development Working Party had approved rebasing of national accounts while approving Rs283.5 million for completing the exercise.

“The rebasing follows latest calculation methodology, which is not yet adopted by any South Asian country, and if the government is not willing to adopt it, it can revert to the old system,” he added.

Sohail said rebasing did result in erosion in size of the economy but could not confirm whether the impact was of Rs2.5 trillion.

The exercise has forced economic managers to go back to the drawing board and rework all economic indicators for the past several years in addition to current year’s projections. The government on Wednesday once again postponed Annual Plan Coordination Committee meeting till May 10 due to its inability to workout next year’s targets because of GDP rebase controversy.

Despite strong feelings that Sohail Ahmad and Arif Cheema overstepped their authorities, the Finance Minister Dr Abdul Hafeez Shaikh is unlikely to take a drastic action against them, said a close associate of Shaikh. Last year, the finance minister also let then FBR Chairman Salman Siddique go scot free despite evidences that he took advances of Rs42 billion from banks to inflate the total tax collection figure.