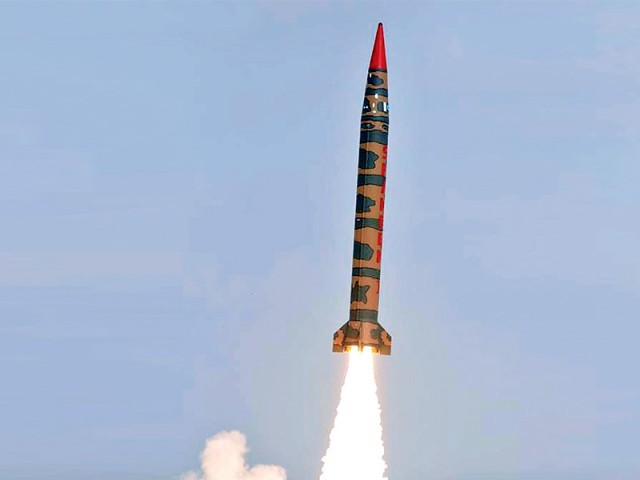 The exact range of the missile was not revealed, but Lt Gen (retd) Talat Masood, a defence analyst, told AFP intermediate range ballistic missiles could travel up to 2,500 to 3,000 kilometres — which would put almost all of arch-rival India within reach.

“The missile is an improved version of Shaheen-1 with improvements in range and technical parameters. It is capable of carrying nuclear and conventional warheads,” read the military’s statement.

The missile’s launch, whose impact point was at sea, was witnessed by Strategic Plans Division Director General Lt Gen Khalid Ahmed Kidwai who revealed that the improved version of Shaheen 1A “will further consolidate and strengthen Pakistan’s deterrence abilities”.

On Thursday India test-fired its long-range Agni V missile, which can deliver a one-tonne nuclear warhead anywhere in China.

Pakistan’s most recent missile test came last month with the launch of the short-range nuclear-capable Abdali, while in April 2008 it tested the Shaheen II, or Hatf VI, missile with a range of 2,000 km.

“This is part of Pakistan’s programme to develop nuclear and missile deterrence. It has a series of missiles in its inventory. This is perhaps the longest range missile in its programme,” Masood told AFP.

“The whole object is essentially India-centric while India’s own programme is directed towards China. Pakistan is engaged in improving its missile system as India continues to increase its capability.”