The suit says ABC has never put a single person of colour in the centra­l role of 'The Bachel­or' or 'The...
By Reuters
Published: April 19, 2012
Tweet Email 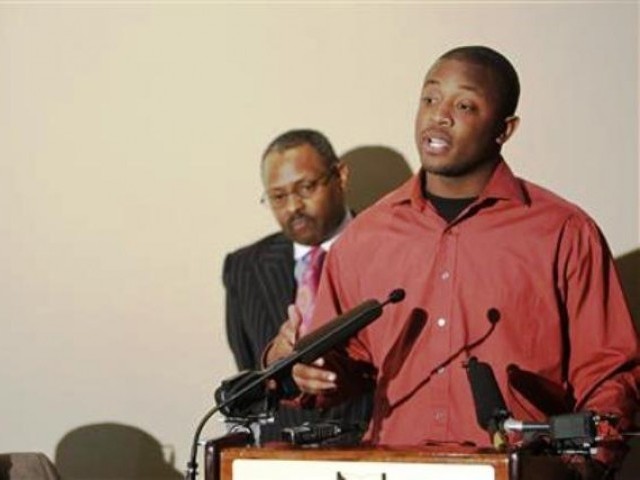 The suit says ABC has never put a single person of colour - whether African American, Hispanic or Asian - in the central role of 'The Bachelor' or 'The Bachelorette'. PHOTO: REUTERS

NASHVILLE: Two black men who said they were “lookin’ for love” and auditioned last summer for the popular ABC reality television show ‘The Bachelor’ sued the network on Wednesday, saying they were rejected because of their race.

“They were tossed aside because of their race,” said Byron Perkins, one of a trio of prominent civil rights attorneys representing Nathaniel Claybrooks, 39-years-old, and Christopher Johnson, 26-years-old, in the suit filed in U.S. District Court in Nashville.

The suit says ABC has never put a single person of colour – whether African American, Hispanic or Asian – in the central role of ‘The Bachelor’ or ‘The Bachelorette’.

The popular shows chronicle the search for a mate as the man or woman dates more than a dozen contenders. Each season ends with a final choice of a partner.

The two men said at a press conference they tried to audition for ‘The Bachelor’ last summer in Nashville.

“I heard about a casting call,” said Claybrooks. “I said to myself ‘I’m single … (I can try) to look for someone I could be compatible to in life … lookin’ for love.'”

He said when he arrived at the auditions, the interviewers spent 45 to 60 minutes with “the white men in front of me” while they gave him only 15 to 20 minutes.

“They rushed me through. I was very upset about the situation and wanted an equal opportunity like anyone else.”

Johnson said his attempt at being interviewed for the role of ‘The Bachelor’ lasted 30 seconds. He said people of colour “never get a show that shows we have love and affection for each other.”

Claybrooks, a former college and minor league football player, is an entrepreneur in Nashville. He owns a barber shop, a sports bar and a car detail business while also working as a meter reader for Nashville Electric Service.

Johnson is also a former college football player and now is a teacher and football coach in Nashville. He said he plans to try out for National Football League teams as a wide receiver soon and also has plans to enlist in the Air Force.

ABC, which is owned by The Walt Disney Co., said it had no comment on the lawsuit.

Warner Horizon Television, the production company behind ‘The Bachelor’ and ‘The Bachelorette’, said in a statement the suit was “baseless and without merit.”

“In fact, we have had various participants of colour throughout the series’ history, and the producers have been consistently – and publicly – vocal about seeking diverse candidates for both programs,” the company said.

Asked last year if the show would feature non-whites, Fleiss the executive producer was quoted as telling Entertainment Weekly: “I think Ashley (the 2011 bachelorette) is 1/16th Cherokee Indian, but I cannot confirm. But that is my suspicion!”

“We really tried, but sometimes we feel guilty of tokenism. Oh, we have to wedge African-American chicks in there! We always want to cast for ethnic diversity. It’s just that for whatever reason, they don’t come forward. I wish they would.”

‘The Bachelor’ made its debut on ABC in 2002 and ‘The Bachelorette’ began to air the following year.