Islama­bad will pay 50 cents per mmcfd to Kabul, get simila­r fee from India.
By Zafar Bhutta
Published: April 18, 2012
Tweet Email 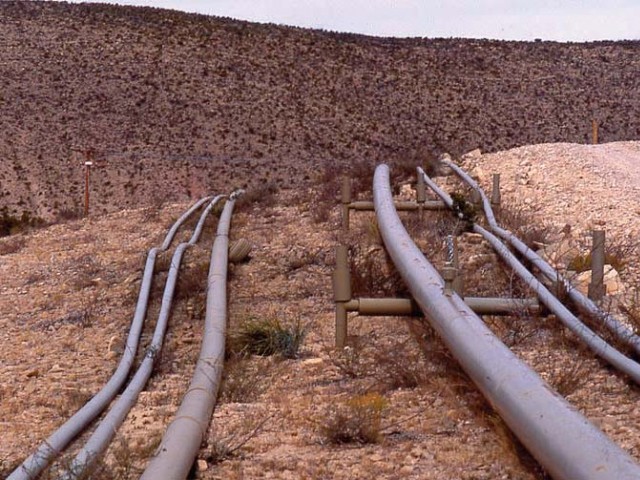 ISLAMABAD: Pakistan, India and Afghanistan have agreed on the rate of transit fee on supply of gas from Turkmenistan through a transnational pipeline, popularly known as Turkmenistan-Afghanistan-Pakistan-India (TAPI) pipeline.

This was the last major stumbling block before reaching a final agreement on the pipeline as Pakistan and India had already negotiated a gas price with Turkmenistan.

Under the proposed arrangement, Pakistan will pay a transit fee of 50 cents per million cubic feet of gas per day (mmcfd) to Afghanistan and the same amount will be paid by India to Pakistan. A final agreement on the fee will be signed after Afghanistan, India and Pakistan get consent from their governments.

During two days of talks that concluded here on Tuesday, Afghanistan demanded a transit fee of 54 cents per mmcfd whereas India offered 45 cents per mmcfd. “In the end, all countries agreed on the fee of 50 cents,” a senior government official said.

Earlier, Afghanistan asked Pakistan and India to pay the fee in the form of gas but Pakistan opposed the proposal.

In early February, Afghan and Pakistani officials had discussed three different proposals for the transit fee which included fee in cash or kind, a fixed fee in dollars on the volume of gas supplied or fee linked with per kilometre length of the pipeline.

Petroleum Secretary Ijaz Chaudhry said Afghanistan and India would now seek the go-ahead from their governments for the fee.

“If the three countries sign an agreement for the fee of 50 cents, India will pay over $600 million per annum to Pakistan, which will make onward payment to Afghanistan,” the official said.

At the beginning of the project, Pakistan and India will receive 1.365 billion cubic feet of gas per day (bcfd) and Afghanistan will be supplied 0.5 bcfd.

The Economic Coordination Committee (ECC) of the cabinet has already allowed the petroleum ministry to sign a gas sale and purchase agreement with Turkmenistan to push ahead with the $7.6 billion gas pipeline. The agreement is expected to be inked next month in Turkmenistan.

However, the two sides will review the gas price every five years. Earlier, Pakistan proposed a price review every three years keeping in view the oil price movements while Turkmenistan wanted it to be fixed for 10 years.

Passco to start wheat purchase from May