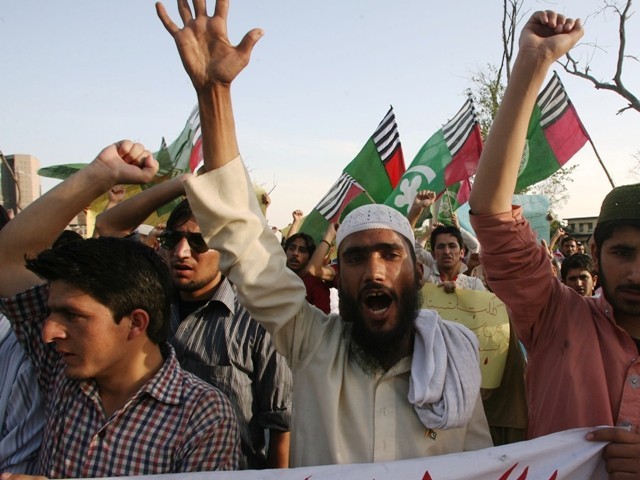 The alleged mastermind and three others suspects wanted in the Kohistan, Chilas and Gilgit killings were arrested by law enforcement agencies on Monday, official sources in the Gilgit-Baltistan Police told The Express Tribune.

Over 450 personnel of law enforcement agencies – army, Northern Scouts, Gilgit Scouts, Rangers and FC – led by major and captain level officers took the wanted men into custody after five days talks with a jirga in Chilas. The forces had besieged the madrassah run by the main accused, Qari Muzamil Shah. The local jirga intervened and persuaded the wanted cleric to surrender. His other accomplices arrested were identified as Sher Ghazi, Shamsul Haq, Nisar, the official requesting anonymity said.

DIG Ali Sher told The Express Tribune by telephone from Chilas that the number of accused nominated in the killing was 11 and said that the Jirga will hand over the remaining six also as investigations continue.

The law enforcers also arrested a suspect wanted in Gilgit grenade attack on a rally of Ahl-e-Sunnat Wal-Jamaat earlier this month.  “We will arrest the main accused in the grenade attack, Zulfiqar Ali, a resident of Burmas in Gilgit,” the official said.

The group, led by Qari Muzamil Shah, was formed to avenge the tkilling of a lawyer and other target killings in Gilgit in January. They got training from Tehrik-e-Taliban Pakistan (TTP), led by Moulvi Asmatullah Moavia, in South Waziristan and Balochistan-based Jundullah group. The group in army fatigues on February 28 shot dead 16 passengers hauling them off buses in Kohistan district. Fifteen out of the 16 passengers killed were Shias.

The main accused, a resident of Chilas and local chief of the banned anti-Shia sectarian organisation, Sipah-i-Sahaba Pakistan (SSP) which was renamed as Ahl-e-Sunnat Wal Jamaat (ASWJ), collected funds in a rally for organising his group, sources in the security agencies said.

He was identified when he led the assailants stopped buses and shot dead nine passengers at Bunar Das near Chilas earlier this month.

The two main Sunnis and Shias mosques in Gilgit were sealed in an effort to stem sectarian violence.

“The two central mosques of Shia and Sunni sects have been sealed for an indefinite period,” a senior administration official said.

The closure of mosques were part of the overall steps being taken to stem sectarian strife that has brought life in the region to a standstill, he said, adding that the fate of both the mosques would be decided in due course.

Witnesses said that after sealing the main gates of both mosques, authorities have deputed security personnel to refrain people from violating the orders given to this effect.

Another senior official in the home department told The Express Tribune that they were encouraging citizens to inform authorities about people possessing illegal arms and ammunition. “The names of such people will be kept secret,” he said.

With a curfew still imposed and cellular phones jammed, the security forces, led by the army, are still patrolling roads to bring back normalcy to the city that fell into sectarian violence early this month.

Note: This article was revised for some editorial changes.