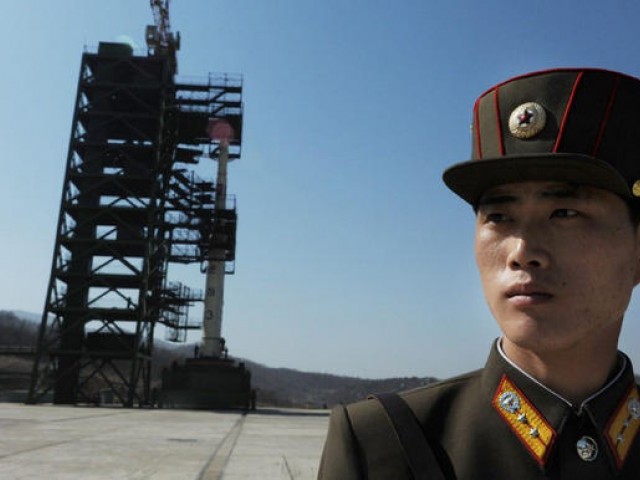 UNITED NATIONS: The UN Security Council on Monday tightened sanctions against North Korea over its failed rocket launch and warned of new action if the isolated state stages a new nuclear test.

The 15-member council — including the North’s closest ally China and nuclear-armed Pakistan — unanimously agreed a statement strongly condemning the launch on Friday which it said had caused “grave security concerns” in Asia.

The council ordered new “entities and items” to be added within two weeks to the sanctions committee list created after North Korea staged nuclear tests in 2006 and 2009.

It also ordered the sanctions committee to revise the individuals and North Korean firms subject to asset freezes under the international measures.

North Korea’s UN mission made no immediate comment on the Security Council action.

US ambassador Susan Rice, the council president for April, said the sanctions committee would draw up a list of new “proliferation sensitive technology” to be banned for transfer to and from North Korea.”

The United States would propose a “robust package of new designations” to the committee, Rice told reporters. This would include the names of companies linked to North Korea’s ballistic missile and nuclear programs.

The council said the launch of the rocket, which disintegrated over the Yellow Sea shortly after blast off, was a “serious violation” of UN resolutions 1718 and 1874. The Security Council “strongly condemned” the act.

North Korea said its rocket launch was to put a weather satellite into orbit, but the United States and its allies said it was an attempt to test a missile launcher.

The council demanded that North Korea hold back from new launches “using ballistic missile technology,” suspend “all activities related to its ballistic missile program” and keep to its promised “moratorium on missile launches.”

“The Security Council expresses its determination to take action accordingly in the event of a further DPRK launch or nuclear test,” said the statement.

South Korea has said it is monitoring evidence that the North is preparing a new nuclear test.

Rice said any nuclear test would be “met with determination”.

“I’m not going to comment on intelligence matters but there is the fact of history that in 2006 a launch was followed by a nuclear test, the same was true in 2009,” she said.

“Clearly the potential for that pattern to persist is one that all members of the international community are mindful of and think would be a disastrous course for the North to pursue.”

Diplomats from several nations highlighted the unanimity of the Council’s message and speed with which it was agreed.

Germany’s UN ambassador Peter Wittig said, “It is time for the North Koreans to end behaving like a pariah state.”

In 2009, it took weeks for the council to agree a statement on the North’s nuclear test, as it did last year when North Korea was accused of sinking a warship of the rival South.

“China has sent a strong message to its close ally by signing up to this statement now and so quickly,” one council diplomat told AFP, on condition of anonymity.

Diplomats also stressed Pakistan and India’s current presence on the Security Council. Pakistan is sensitive because of its own nuclear bomb, while its nuclear scientist Abdul Qadeer Khan sold nuclear secrets to North Korea.

China has publicly urged restraint over North Korea’s missile launch and called for world powers to work to reopen long stalled talks on the North’s nuclear weapons — which involve the two Koreas, the United States, Japan, Russia and China.

The statement made no mention of the six-nation talks, however.