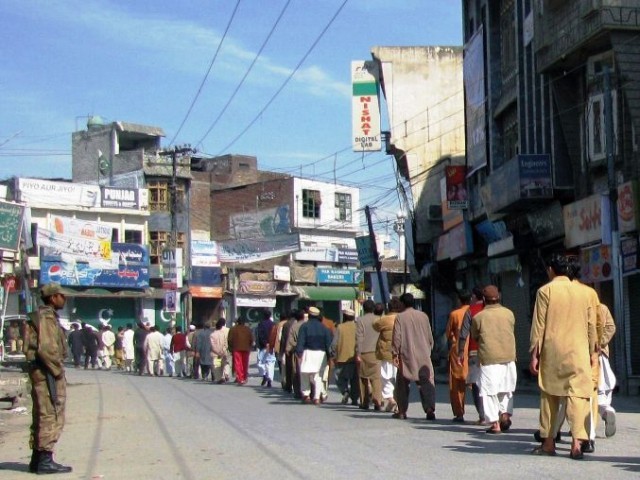 Curfew in the violence-hit city of Gilgit was relaxed on Sunday for six hours, the longest break since it was imposed 13 days ago after 16 people were killed in sectarian clashes.

According to announcements made by authorities, the relaxation commenced from noon and people were asked to replenish their food stocks.

Parts of Gilgit have experienced food shortages following the suspension of traffic on Karakoram Highway in the wake of recent killings.

“The break in curfew will be expanded gradually before it is finally lifted,” said Usman Ahmed, a senior government official. However, he did not give a timeframe for when the curfew will be lifted and cellular service restored.  “The matter is being deliberated over and the public will be notified when a decision is taken.”

Security remained tight all over the city on the 13th consecutive day, with the army still manning dozens of security pickets and conducting body searches of residents. Security forces continued search operations on Sunday in various residential areas of the city and arrested dozens of suspects.

The nationalist parties of Gilgit-Baltistan have demanded of the government to ban mainstream political and religious parties in GB to ensure long term peace and harmony.

In separate statements, the leaders accused some major political and religious parties of creating disturbances due to vested interests.

They also demanded the government to lift the two-week long curfew, which has become a humanitarian issue due to the unavailability of medicine in hospitals and water and other amenities at homes.

Gilgit-Baltistan United Movement (GBUM) Chairman Manzoor Parwana said that security agencies were violating the fundamental rights of the people of G-B by imposing the curfew. Citing the shortage of basic necessities such as life-saving drugs, Parwana said “the casualties in the wake of this curfew could be more than (those caused) the terrorist acts in Gilgit.”

He maintained that an external hand was involved in the otherwise peace loving region.

Gilgit-Baltistan National Movement (GBNM) Chairman Dr Ghulam Abbas blamed the religious clerics. “The situation will never improve as long as religious clerics are given undue importance while elected representatives are kept in the dark. If the government does not handle the situation carefully, they will continue to exploit it further.”

Balawaristan National Movement Chairman Abdul Hamid Khan called for the deployment of impartial law enforcers and urged the authorities to ensure the fundamental rights of people from the area.

Meanwhile, Interior Minister Rehman Malik could not make it to Gilgit on the second consecutive day due to harsh weather. He was scheduled to visit the restive area along with a delegation of religious scholars to help the tribes come to a peaceful settlement.

Earlier this month, the mountainous city of Gilgit plunged into the worst sectarian crisis after a rally of Sunnis was attacked with a hand grenade, killing six and injuring 50 others. In retaliation, 10 Shia passengers were killed in Chilas where an enraged mob set alight four buses, resulting in the imposition of a curfew and suspension of cellular phone service.

The curfew will be relaxed on Monday (today) from 7 am to 3 pm.