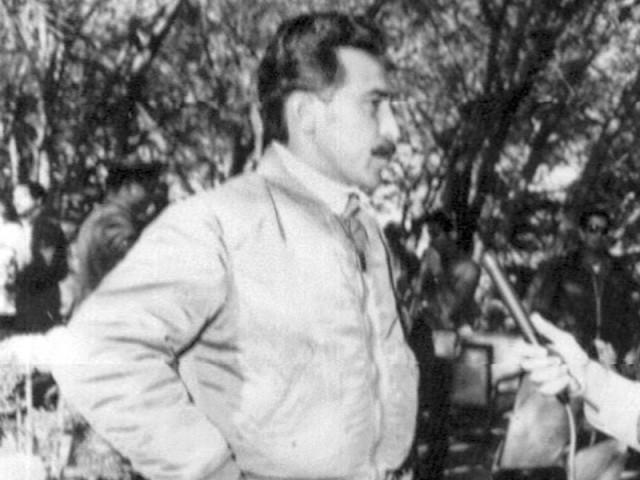 One of Pakistan most loved war heroes, Cecil Chaudhry, passed away in Lahore on Friday. Chaudhry, 70, was put on life support at Lahore’s Combined Military Hospital on Wednesday. He was suffering from lung cancer.

The son of FE Chaudhry, a former science teacher and Pakistan’s first photo-journalist, Chaudhry was schooled at St Anthony’s High School in Lahore before pursuing his BS in physics at the Forman Christian College. He subsequently joined the Pakistan Air Force Academy in 1958, where he studied aeronautics and mechanical engineering.

In the 1965 war with India, Flight Lieutenant Chaudhry shot down three Indian aircraft in one mission. In the 1971 war with India, he has a close call when his plane was hit over Indian territory but  he managed to glide the plane back into Pakistan.

Four days later, he shot down two Indian fighters in the same area. He was awarded the Sitara-e-Jurrat and the Sitara-e-Basalat for his role in Pakistan’s war with India in 1965 in 1971.

Despite his national status, his career was interrupted in 1983 when, after returning from deputation in Iraq, he was told by the air force high command that he “would not be promoted any further.” Recovering from the shock, Chaudhry asked to be discharged in 1985.

It was apparent that Chaudhry’s faith and prominence had come in the way of his rise in the air force. But Chaudhry was not one to sit back and fade into oblivion. He became a human rights activist as well as taking on the position as the principal of St. Anthony’s College, Lahore and Saint Mary’s Academy, Rawalpindi. He retired from this post in July 2011.

In an interview he gave in 2001, Chaudhry minced no words when he said that discrimination in the armed forces started soon after General Ayub Khan took power in 1958. The discrimination was initially restricted to the army as “many generals felt that it would not do if a Christian general one day stood up and took power in Pakistan.”

The resentment against the non-Muslims then spread to other services by the time General Zia took power in 1977. Chaudhry said that Zia “totally played the religious card with the result that the forces were given a thorough clean up job both vertically and horizontally.” The purges went to the lowest levels where non-Muslims were eased out when they reached a certain rank.

An influential human rights activist, Chaudhry worked for educational reform and for the betterment of children with disabilities in his later years.

He advised and worked closely with former minorities’ affairs minister Shahbaz Bhatti and served as the executive secretary of the All Pakistan Minorities Alliance (APMA). He was also affiliated with the National Commission for Justice and Peace and was instrumental in leading the fourteen year campaign that led to the restoration of Pakistan’s joint electorate system in 2002.

Talking to The Express Tribune, daughter Michelle Chaudhry said that she has lost not just her father, but a loving friend. He leaves behind three daughters and a son. Chairman APMA Dr Paul Bhatti announced 10 days of mourning over Chaudhry’s demise. His final rites will be performed on Sunday in Lahore.