Afghan elite raiders say they are US equals: Report

Afghan elite raiders say they are US equals: Report 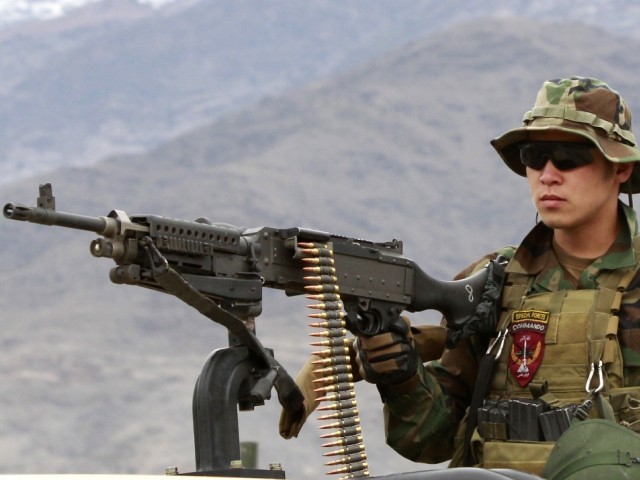 KABUL: It’s a special-forces entry like no other and guaranteed to spoil the element of surprise, but Afghanistan’s new elite soldiers insist they will be no less effective in countering insurgents than controversial night raids by US forces.

Under cover of darkness, Afghan soldiers will surround the homes of suspected insurgent targets and then shout a demand that those inside separate into men and women before storming the door, safeguarding conservative cultural sensitivities.

“We announce eight to 10 times that we are Afghan security forces and won’t harm you. We ask them to take women and children to one side of the home and males to the other,” said Colonel Jalaluddin Yaftali, the commander of Afghan Special Forces.

“We operate very carefully and find our target,” Yaftali told Reuters in an interview.

Surprise night raids in pursuit of militants have long fanned anti-Western sentiment in Afghanistan, with many locals seeing them as violations of privacy, especially of women, in conservative southern areas where Taliban support is strongest.

On Sunday, Afghanistan and the United States reached an agreement that only Afghan forces would be able to search residential homes or compounds, while Afghan police and soldiers would have to protect women and children, as well as culturally sensitive places.

The agreement reached after months of at-times tense negotiations, also gives Kabul the power to veto operations and removed a major obstacle to a wider pact to secure a US presence after withdrawal of most foreign combat troops in 2014.

The hope is that the strategy will lower civilian casualties in night raids and reverse some of the calamitous damage they have caused to President Hamid Karzai’s popularity as foreign combat troops hand over to Afghan security forces.

Under the deal, Afghan police and soldiers are supposed to seek an Afghan judicial warrant before conducting raids. Afghan authorities will also have control over prisoners taken and will decide whether to allow US interrogators access to detainees.

US defence officials insist that not much is changing in Special Forces operations, which occur mostly at night, and say they have been almost 100-percent Afghan-led since last year.

Some security analysts, and privately even some members of the Afghan military spoken to by Reuters, worry that the constraints now attached may make raids less effective, and see fewer carried out.

Western commanders have seen the raids as one of the most effective anti-insurgent tactics and the danger is that shouted warnings could give targets time to escape in Afghanistan’s warren-like, mud-walled villages and home compounds.

A US defence official, speaking on condition of anonymity, acknowledged that the new arrangement might, hypothetically, slow the pace of efforts against the Taliban and its allies in the crucial period when foreign forces begin to withdraw.

“In theory could this severely hamper operations in Afghanistan? Potentially,” the official said. However, he added: “In practice, do we think it will do so? No, because both sides understand the importance of these operations.”

US officials insist they do not expect the warrant requirement to slow quick-strike raids. They also note that, in theory, the Afghan constitution allows for warrantless search/detention in some situations if warrants are requested within 48 hours of a raid taking place.

Pentagon spokesman Captain John Kirby said that since the shift to an Afghan lead in special-forces raids in December, more than 350 raids had been carried out and insurgent targets were located in more than three-quarters of those.

He said the agreement would apply only to US special forces units and not other foreign contingents with special forces, including the British and Australians.

Yaftali said he did not think the new law would create problems for operations.

“Whatever we do is according to the Afghan constitution,” he said. “In most of the cases in Afghanistan, we get to our target without any fighting or fatalities, because our operation is fast and accurate.”

“During our night raids we have killed many so-called shadow governors for the Taliban, self-nominated Taliban police chiefs and shadow district governors, as well as their commanders and fighters,” he said.

He said his unit, planned to number about 3,000, but still only half that size, was as well-equipped as NATO forces, with American M4 rifles and night-vision gear. It had also recruited female soldiers to search women-only compounds, he said.

“Right now our personnel operate independently and around the country. Our operations are in cooperation with a US technical team,” Yaftali said.

A new Operational Coordination Group, or OCG, to be set up by the Afghan government will oversee special forces operations, with the US providing intelligence, helicopter and air support, as well as medical evacuation, security and support.

There will also be a bilateral oversight committee chaired by Afghan Defence Minister General Abdul Rahim Wardak and NATO’s top commander in the country, US Marine General John Allen.

US officers spoken to by Reuters in southern Kandahar province welcomed the change, saying it would help free up American troops and deepen cooperation with Afghan forces.

“I think it’s a natural progression,” said Colonel Todd Wood, commander of the 1/25 Stryker Brigade Combat Team, which has been in charge of three districts for the past year.