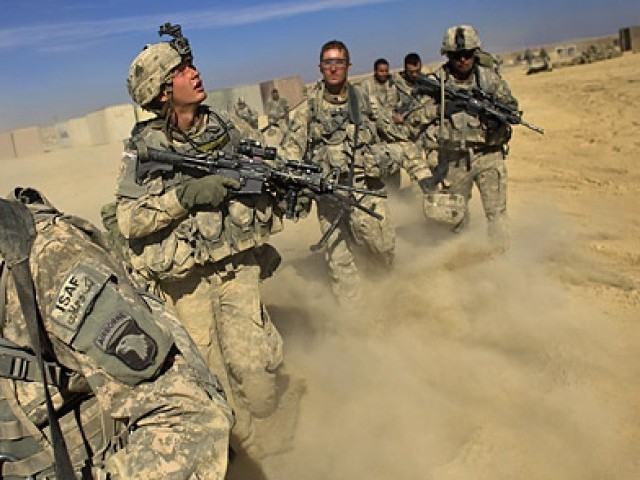 “It is not that the Taliban are too strong, rather the Afghan security forces are too weak, which is why the US should stay to ensure the Taliban do not return,” suggests a jounalist. PHOTO: AFP/FILE

The United States should learn from its mistake and shouldn’t completely abandon Afghanistan as it did in the 90s. Even though the Afghanistan we have today is different from the one 20 years back, their local police and military forces aren’t strong enough to respond to any internal or external threat. US presence, to some extent, is therefore necessary.

These views were expressed by noted British-American print and TV journalist, author and CNN’s national security analyst Peter Bergen while talking on the Afghan endgame during a forum discussion.

The discussion on “Future of al Qaeda and Pak-US relations” was organised by Centre for Research and Security Studies on Thursday and was attended by several journalists, thinkers analysts and academics.

“It is not that the Taliban are too strong, rather the Afghan security forces are too weak, which is why the US should stay to ensure the Taliban do not return,” he suggested.

Bergen said the US is spending less than 1% of its Gross Domestic Product in Afghanistan, yet the public opinion in US is vehemently in favour of troops’ withdrawal.

On the other hand, the common perception in Afghanistan is that the Taliban’s return would be fatal for their country. “This time they seem to be prepared to fight them,” said the author of “Holy War Inc.” and “The Osama Bin Laden I Know”.

Bergen took Bin Laden’s first television interview in 1997, where the latter formally declared war against the US.

Later, while talking to The Express Tribune, Bergen said the biggest benefit of the US war in Afghanistan was the disarming of warlords through the Disarmament, Demobilisation and Reintegration programme.

“The warlords would most probably fight on the side of their government in case of any future threat,” he argued. However, he admitted that the Taliban enjoyed support in some part of Afghanistan and that “may be the reason why the Taliban were troubling the US and international forces.”

Replying to a question, he said he believes Pakistan was keeping its ‘strategic assets’ intact to be used in future. However, he said the US cannot afford a rift in friendly relations with Pakistan.

Moving on to talk about drone strikes, the analyst said the public opinion in US also does not favour them. “People don’t want drones to be used as a tactical tool at the cost of alienation of an ally like Pakistan,” he remarked.

He called for working together on a joint strategy on drones as it was “in the interest of both countries.”