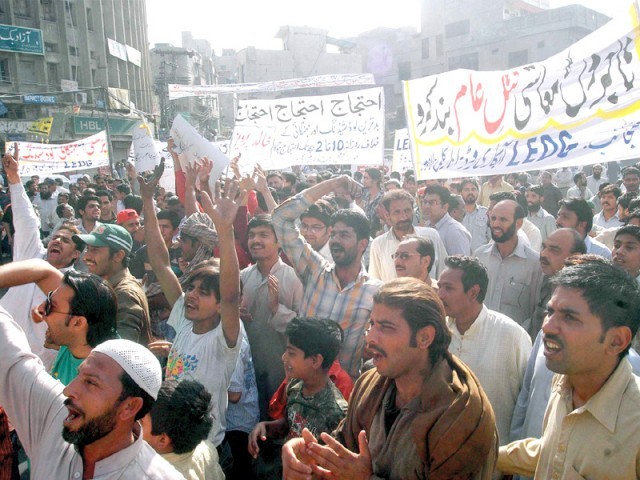 Angry protesters chanting slogans against loadshedding during a demonstration in Lahore. PHOTO: PPI

As blackouts continued to pile misery on much of Punjab on sixth straight day, so did violent demonstrations across the province. Protesters in Faisalabad announced they will besiege residences of Members of National Assembly (MNAs) and Members of Provincial Assembly (MPAs) for their inaction to tackle the issue.

On Monday, Punjab Chief Minister Shahbaz Sharif visited Faisalabad and assured the protesters that the Pakistan Muslim League-Nawaz (PML-N) leaders, workers, MNAs and office-bearers will participate in these protest rallies to express their solidarity. However, since the protestors found that commitment wavering, they decided to stage sit-ins outside the residences of PML-N MNAs and MPAs.

Meanwhile, more than 18 processions were taken out from different parts of the district, during which vehicles were ransacked and major roads blocked. They were chanting slogans against the government and Wapda for the persistent electricity load-shedding.

Another office of the Lahore Electric Supply Company (LESCO) was ambushed by enraged protesters on Wednesday amid fresh riots over power outages.

Protests also broke out on Multan Road, Wahdat Road and The Mall.

SHO Khawaja Hasan Raza said that so far no arrests had been made. When the police reached the protest site, they managed to convince protesters to exit the Lesco office.

The other protest was recorded at The Mall by traders of Hall Road. They set up a hunger strike camp at Faisal Chowk in the morning which continued till the evening. Traders threw rotten eggs at protesting lady health workers to stop them from protesting and decided to join the Punjab government’s scheduled protest on March 31.

Locals and traders of Multan Road were chanting slogans against the government accusing it of causing engineered load shedding and hefty electricity bills. Traffic on Multan Road remained blocked for nearly one hour.

Baghbanpura police registered an FIR under section 454, 380, 346, 147 and 149 of Pakistan Penal Code against 400 unidentified protesters for setting fire to a petrol pump on Monday.

The Lahore Bar Association (LBA), owing to the prevailing crises of load shedding, vowed to take out a rally, stage a sit-in and surround the Water and Power Development Authority office on Wednesday if the load shedding was not stopped.