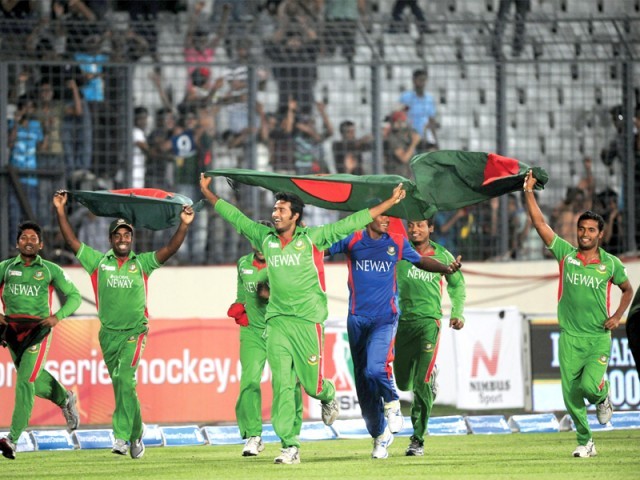 The hosts’ route to the final included wins over India and Sri Lanka and a close loss against Pakistan with the team finally showing the resolve and determination its fans and supporters have been longing for. PHOTO: AFP

Bangladesh shocked 2011 World Cup losing finalists Sri Lanka to reach the final of the Asia Cup where they will take on Pakistan tomorrow.

Bangladesh beat Sri Lanka by five wickets in a rain-affected match to finish level on points with World champions India. However, an earlier win against India came in handy for the hosts who, despite an inferior run-rate, qualified for the title-clash.

Bangladesh did well to restrict Sri Lanka to 232 but rain prior to the start of the chase dampened the hosts’ spirits. They lost Nazimudding off the 10th ball of the innings as well and slipped to 40 for three. But Shakibal Hasan and Tamim Iqbal shared a 76-run partnership to take their side closer to the adjusted target of 212. The duo was dismissed but an unbeaten stand between Nasir Hossain and Mahmudullah completed the upset and seal one of the finest moments in Bangladesh’s cricket history.

Mushfiqur Rahim complimented the team-effort that led to the win, backing his players to win the big match as well.

“It has been a great tournament for us,” said Rahim. “Everyone chipped in. Nazmul Hossain did well, that set up the game. We had a stiff target after the rain but Shakib and Tamim batted well. There are five or six people performing in every game.

“The final is one of the biggest matches in our cricketing history. Hopefully we will cross that hurdle. It is a great boost to have the crowd supporting you as well.”

The losing captain, meanwhile, rued his team’s poor show throughout the tournament, the losing World Cup finalists going home without a single win.

“We did not play to our potential, made quite a few mistakes and never got into a rhythm,” said Jayawardene. “Bangladesh played very well today, they created opportunities from the start. We felt the pitch was slower and the ball came on better after the rain.

“We had our opportunity when they were 135 for five but some wayward bowling gave it away. It was a team effort from Bangladesh and it’s always tough when you play Bangladesh at home.”

Earlier, Chamara Kapugedera scored 62 to lead Sri Lanka’s fightback after being reduced to 32 for three. Nazmul Hossain took all three early wickets to fall and with the three big guns not firing, Sri Lanka were unable to put up a total big enough for the Bangladesh spirit.