15 compla­ints lodged at cell in four days but trader­s say no action taken yet.
By Our Correspondent
Published: March 16, 2012
Tweet Email 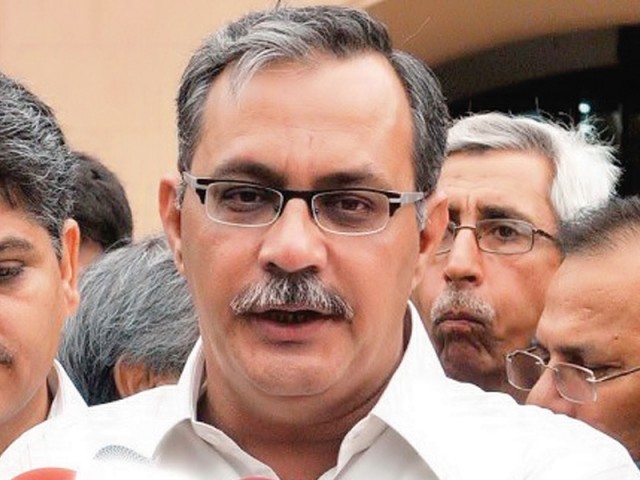 15 complaints lodged at cell in four days but traders say no action taken yet.

Karachi is fed up of being held for ransom to extortionists. Matters came to a head on Thursday with the government’s key coalition partner threatening to boycott the president’s Saturday address to parliament. Businessmen are so fed up of the inefficiency of the police and Sindh government that they have begged the head of an intelligence agency to step in.

The Muttahida Qaumi Movement (MQM) made itself heard loud and clear with its legislator Haider Abbas Rizvi saying that they would boycott the president’s address if something is not done. President Asif Ali Zardari is scheduled to address the joint session at the beginning of the new parliamentary year.

The MQM’s announcement came hours after the Sindh police chief, Mushtaq Shah, dismissed the uproar over street crime and extortion, saying that it was not out of the ordinary for a big city like Karachi. His offer to traders to post 800 more policemen in badly hit areas was met with little faith.

The MQM retorted that Karachi was the country’s economic bloodline – out of every Rs100 made, Karachi contributes Rs70. MQM’s Haider Abbas Rizvi spoke of the extent of the damage being done as businessmen are taking their business abroad. “They are receiving death threats and threats that their children will be abducted,” Rizvi said. “It seems [like] it is all by design and planned – as if the police in the areas where such incidents are rampant are deployed on the will of the extortionists.” He specifically mentioned Karachi’s biggest flea market in Sher Shah where he said that more than 6,000 shops are stripped of Rs600, 000 every day.

Rizvi was candid that his party may not attend the joint session until the PPP hems in extortion and street crime in Karachi, the country’s industrial hub. “Although we are a part of the coalition government, we cannot forget the support that the people of Karachi have given us by voting for us all these years,” he said outside later on. “We will raise our voice for their protection and also call for a peaceful protest.”

Until the government controls the security situation in Karachi, the party will stage a walk-out every day. For starters, the MQM legislators staged a walkout on Thursday that lasted an hour and 10 minutes. Rizvi said that even though Interior Minister Rehman Malik had announced that they had set up check posts, the situation was just getting worse. Rizvi added that if extortion and target killing were not reduced, his party might boycott the upcoming joint parliamentary session as well.

It is a measure of the complete lack of faith in the police and Sindh government that businessmen went to the chief of the Inter-Services Intelligence (ISI), Lt-Gen Zaheerul Islam, to complain about extortion and threats. In fact, they asked him this week to set up a cell at the intelligence agency’s Karachi office where the government plans to install a locator.

Sources said that the newly appointed DG, who was the corps commander of Karachi during its blood summer of 2011, assured the delegation they would completely support the police and Rangers.

Mian Zahid Hussain of the All Karachi Industrial Alliance, Zafar Iqbal of DHA Residents Society and Mehtabuddin Chawla were part of the delegation.

Zahid told The Express Tribune that they reminded the DG of orders issued by the Chief of Army Staff regarding a cell against extortion. “We held a meeting with General Kayani in September and he assured us that a cell would be set up at the ISI office if government installs a mobile phone locator,” he said.

Zahid said that all federal ministers, including Asim Hussain, Rehman Malik and the governor had promised this would happen. The mobile phone tracker costs Rs50 million. But he said that the business community pays around two billion rupees in taxes every day and the government was not doing anything to keep it safe.

Earlier, angry traders met Inspector General of Police (IGP) Mushtaq Shah in Karachi as these developments unfolded in the capital. He told them that he had added 800 more policemen to the force in a bid to control extortion and street crime.

But they did not seem to be convinced. Karachi’s marble association announced it was going on strike for an unspecified time from Saturday over extortion. Marble Exporter Association’s Sanaullah Khan who met the IGP told The Express Tribune said that marble traders do not trust the police. “They are not worried one bit about us,” he said. “We were not satisfied by their promises. We’ll take back the call for a strike only if things change by Saturday.”

The anti-extortion cell has received 15 complaints since it was set up. Anti Extortion Cell (AEC) chief DSP Wasif Qureshi told The Express Tribune that the cell received complaints in four days from different markets or associations. “It has just been four days since we got to work,” he said. “I hope that now those who have not stepped forward will come to us.”

It did not help that the IG played down street crime. There is no significant difference between old and new crime data, he said at the Garden police headquarters after attending the funeral for a constable who was killed in a shoot-out with robbers on Burnes Road early Thursday. He said the police’s arrests were proof of its performance.

SITE Association chairman Mohammad Irfan Moton flatly disagreed. He told The Express Tribune that there had been no progress in the police’s performance in the area with 3,500 factories. “Each day thousands of people risk their lives and come to work here and risk their lives going back,” he said. “But instead of things getting better they just keep getting worse.”