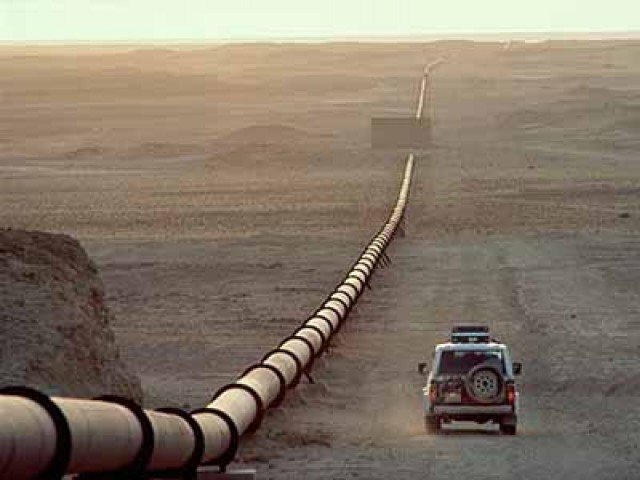 The financial advisor is responsible for arranging funds for completing the 800-kilometre-long pipeline, at an estimated cost of $1.5 billion. PHOTO: AFP/FILE

The all-weather friendship appears overcast, purportedly due to Western pressure.

A federal cabinet committee on Tuesday constituted a ministerial committee for reviewing alternate options to arrange funds for construction of the Iran-Pakistan gas pipeline after a Chinese bank backed off from financing the project.

Headed by Finance Minister Dr Abdul Hafeez Shaikh, the Economic Coordination Committee (ECC) of the Cabinet took the decision after the petroleum ministry disclosed that the Industrial and Commercial Bank of China (ICBC) was reluctant to sign the financial advisor contract despite being the lowest bidder.

The financial advisor is responsible for arranging funds for completing the 800-kilometre-long pipeline, at an estimated cost of $1.5 billion.

The committee will comprise the petroleum minister, the water and power minister, the State Bank governor, petroleum, finance and economic affairs division secretaries and the Planning Commission deputy chairman.

“A probable reason for not signing the agreement [by the ICBC] to date could be changing geo-political situation in the region,” said a petroleum ministry summary tabled at the ECC meeting. Earlier, the US has threatened to impose sanctions on companies that deal with Iran.

The ICBC was finalised as the financial advisor through an international competitive bidding. However, according to a petroleum ministry official, the bank had demanded awarding the pipeline construction project to a Chinese firm without competitive bidding.

The petroleum ministry sought the ECC’s permission to cancel the contract with the ICBC and award it to the second-lowest bidder, which is a consortium of United Bank Limited, Burj Capital, ECO Trade and Development Bank, Field Stone Group and Islamic Corporation for Development of Private Sector.

The decision to go ahead with the pipeline project came despite a US ‘warning’ to look for alternative options and abandon the project.

According to a contract signed in 2009, Iran will supply 750 million cubic feet of gas per day from South Pars fields to Pakistan.

The petroleum ministry has proposed that the government set up separate accounts in Pakistani banks to collect a gas development cess levied to build the pipeline. The estimates suggest that all funding requirements could be met through gas cess, the proposal stated.

The ministry also proposed to approach the Chinese, Russian or Iranian governments for signing government-to-government contract for construction of the pipeline from the Iranian border to Nawabshah. If this proposal was accepted though, the government will have to waive off public procurement regulatory authority rules to avoid competitive bidding. Iran has already offered $250 million for pipeline construction.

The ECC also discussed the possibility of exporting wheat to Iran in a barter arrangement, agreed to explore further arrangements of barter trade with Iran, expedite the process, plan the restructuring of barter system, and to find out items which may be procured from Iran in return. A ministerial committee was also constituted to look into the issue and report to the ECC.

The committee also allowed selling 450,000 metric tons of surplus wheat in the domestic market. The ministry of national food security and research had proposed selling 1 million tons of wheat to the local millers.

The ECC approved Rs6.1 billion in loan for railways ministry for repair of 96 locomotives. The loan will be given in advance to Pakistan Railways Advisory and Consultancy Services Limited, a subsidiary of Pakistan Railways whose shares are wholly owned by the government. The railways ministry has already signed the loan agreement with a consortium of commercial banks.

The ECC increased the sale price of fertiliser at government outlets by 23%. Against the previous rates of Rs1,300, the new price has been set at Rs1,600 per 50 kg bag, according to the finance ministry.  The government is subsidising imported urea since each 50 kg bag costs more than Rs3,000.

(Read: Pakistan and the Iran pipeline)