A study at three instit­utions found that stress was a key aggrav­ating factor.
By Samia Malik
Published: March 11, 2012
Tweet Email 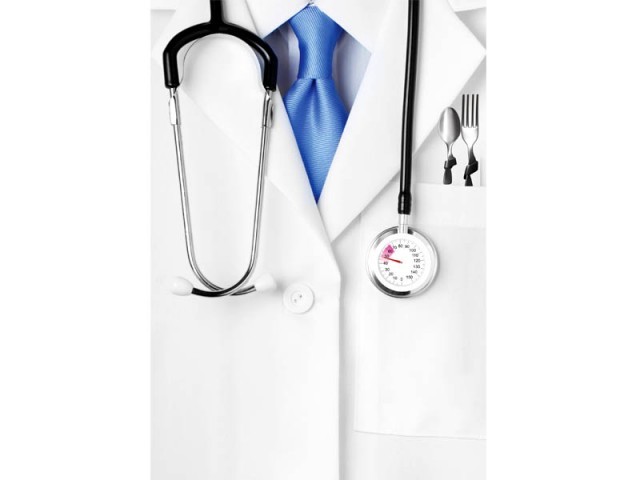 A study at three institutions found that stress was a key aggravating factor . DESIGN: AMNA IQBAL

The thelay walas, rolls and samosa stalls in canteens and outside almost all schools testify that students are generally bad eaters but the findings of recent research on eating disorders in medical students somewhat humiliates the saying ‘practice what you preach’.

The students of the Pakistan Medical Students Research Society from Dow Medical College (DMC) carried out a descriptive cross-sectional study in Karachi to assess the population of medical students at high risk of developing eating disorders. The results were shocking, showing that about 17 to 23 per cent of medical undergraduates suffer from eating disorders. Women in particular, they found, are at a greater risk, ie above 80 per cent, the findings reveal.

Akhtar Amin Memon, one of the authors of the study, said that they started the research after noticing multiple examples in their college. For instance, a third-year student at Dow Medical College, suddenly got so obsessed about her weight that she went on a banana and milk diet for two months. “We used to call it ‘serotonin abuse’, but she managed to lose a lot in the end.” Bananas release serotonin in your body that is associated with happy feelings in the human body and help reduce weight, he said.

Similarly, Nida Bukhari, a third-year student at SMC shared that she goes through phases of eating. Some days she is hogging junk food like French fries, burgers, rolls and samosas and on others she cuts down on everything and adopts a complete diet for losing weight. “I eat more when I am studying but my appetite completely vanishes during exams,” she said.

The study that was published in Bio Medical Central research notes on February 1 was carried out on 495 undergraduate medical students from three urban medical colleges – Dow Medical College, Sindh Medical College and Aga Khan University – between January 1 and June 30, 2011. There were 435 respondents out of which 342 were female while 93 were male. Data was collected using two self-administered questionnaires, the SCOFF Eating Disorders Questionnaire and the Eating Attitudes Test (EAT-26). According to EAT-26, 22.75 per cent of individuals were found to be at high risk of eating disorders, with 87.9 per cent of them women and 12.1 per cent men.

Their findings reveal that medical students are more prone to eating disorders because they are exposed to high levels of stress as compared to other students.

Memon said that medical students face a lot of pressure. To start with they have an extensive and difficult course, study of which consumes most of their daily time and completely cuts them off socially. The course is taught in a very boring manner, there is high competition to pass international exams and there is a lot of financial instability.

Dr Murad Qadir, a consultant physician from Hamdard University, said that eating disorders are directly proportional to stress. “While students are generally eating unhealthy food in our country, medical students are indeed under a lot more stress than others.”

The authors also link it to various studies in different settings that have highlighted the role of media exposure and its psychological effect, particularly on women with resultant development of body dissatisfaction culminating in eating disorders.

Memon also highlighted that apart from the result, what is also alarming is the fact that even students who are underweight were on a diet or have unhealthy eating habits which relates more to stress in medical students than any other factor.

These disorders are potentially lethal. Anorexia nervosa, in particular, is reported to derange several systems with resultant complications ranging from purpura (condition causing skin blotching), liver dysfunction, osteoporosis, diabetic complications to acrocyanosis (tingling and colour change in fingers). Particularly, anorectic patients have been reported to die at a premature age possibly from one of the above stated medical complications.