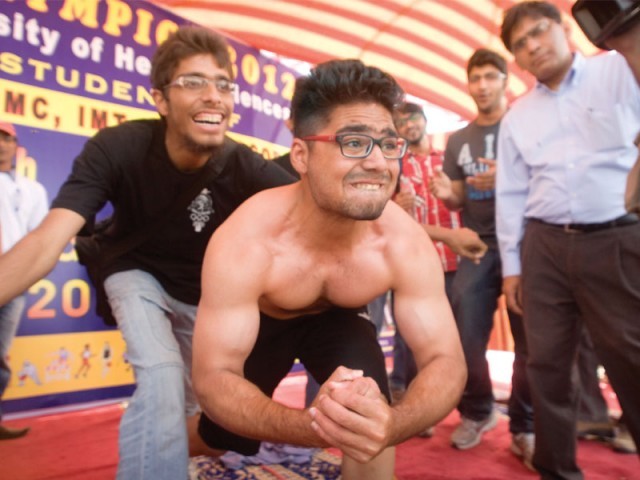 The body building competition stole the limelight on the first day of the Dow University of Health Sciences Olympics. PHOTO ATHAR KHAN/EXPRESS

KARACHI: His olive-oil smeared Pectoralis Major bunched up as his Biceps Brachii squeezed. In the strain, his inferior dental arch disappeared and his Procerus wrinkled. But Bilal Khan enjoyed every second of the performance, which won him the coveted title of Mr DUHS 2012.

Thus, the body building competition stole the limelight on the first day of the Dow University of Health Sciences (DUHS) Olympics.

The excited crowd of young medical students cheered on their favourites, while debating who would walk away with the title. “Bilal Khan can easily win,” predicted one animated girl but her friends nominated the other contestants. As the girls eyed the pecs and abs on full display, the judges announced that Bilal Khan from Dow Medical College (DMC) was indeed the winner. Sindh Medical College’s (SMC) Bilal Ahmed came in second.

The first DUHS Olympics was held in 2008 and the second one has been organised this year at the DUHS Ojha Campus. During the four-year break, student week is organised annually with multiple competitions. The qualifying rounds for the Olympic games started on February 27. “We have a lot of students who wanted to participate and we gave everyone an equal chance, but eventually the best of the lot were selected,” said the patron of the games and co-curricular activities at DUHS, Prof. Rana Qamar Masood. “Almost 6,000 to 7,000 students and 600 teachers from nine DUHS institutes are participating in the Olympics this year.”

The teachers took part in the tug of war, basketball, and cricket among other games on inauguration day.

The sports competitions, such as cricket, badminton, tennis, races and squash, throughout the Olympics will be held separately for male and female students while other events such as debating, a mushaira and singing will be contested by all. The boys took the lead in the cooking competition by bagging the top two positions. The two favourite desserts which tickled the judges’ taste buds were muffins and Indian zafrani ras-malai.

Despite an atmosphere of sportsmanship, the rivalry between the students of DMC and SMC was evident in the games. Teams from both colleges contested against each other in multiple competitions, including volleyball, football and Mr DUHS.

Adil M Hanif, a SMC pharmacy student who played a tough football semi-final with DMC, was ecstatic about his team’s victory.  He praised their performance in the cricket match against DMC, “Miandad ka sixer was repeated when our player hit a six on the last ball for the remaining five runs,” he gushed.

The event offers the otherwise busy medical students a chance to socialise with their peers and professors. Students from the Institute of Nursing said that the sports week allows students from different institutes to bond as well while doctors from SMC said the Olympics week provides them a good workout session.

The first day of the event saw the organisers dealing with last-minute cancellations and confirmations by contestants. The results of the Olympics will be announced on March 17 and a trophy will be given to the institute that wins the most competitions.

Fake currency notes: Banks claim forgery is on the rise