The party appear­s to lose in UP, Punjab and Uttara­khand but leads in Manipu­r and Goa.
By Reuters
Published: March 6, 2012
Tweet Email 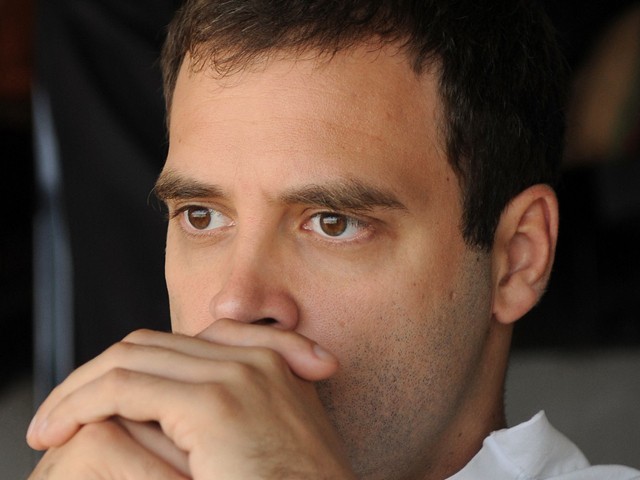 India’s Congress party was trailing in fourth place as counting of votes got underway in Uttar Pradesh on Tuesday, a stunning blow to Rahul Gandhi who had staked his political future on reviving his party’s fortunes in the populous northern state. PHOTO: AFP/FILE

NEW DELHI: Rahul Gandhi, the Congress party politician seen as India’s prime minister-in-waiting, on Tuesday accepted responsibility for poor results in state elections in which he had led campaigning.

“I stood in front, so it is my responsibility,” he told reporters in New Delhi. “Organisationally we are not where we should be in UP (Uttar Pradesh state).”

The five state elections, particularly in the key state of Uttar Pradesh, were a high-profile test for Gandhi, the 41-year-old scion of the Nehru-Gandhi dynasty.

“My work will go on. My entire effort will be to help the Congress party stand up in UP and that one day, we win there.”

Congress hoped to make a major advance on their 22 seats in the Uttar Pradesh state assembly, but are officially predicted to have just 27 seats when counting is completed later Tuesday.

Congress was trailing in fourth place as counting of votes got underway in UP on Tuesday, a stunning blow to Gandhi who had staked his political future on reviving his party’s fortunes in the populous northern state.

“It’s baffling if this is true,” Congress spokesman Abhishek Manu Singhvi said as partial results showed his party was likely to fall far short of the 120 seats it predicted it would win in the state’s 403-seat legislative assembly. “I still don’t believe the trends.”

With results in for 321 seats, Congress and a regional ally had won just 40.

Congress also looked set to lose in the states of Punjab and Uttarakhand, but were leading the seat tally in two smaller states that also went to the polls over the last month, Manipur and Goa.

The leftist Samajwadi Party (SP) looked set to win by far the largest number of seats in Uttar Pradesh, a state that with 200 million people. This could mean a return to power for Mulayam Singh Yadav and the ouster of flamboyant low-caste leader Mayawati as chief minister of the state.

Gandhi, scion of the Nehru-Gandhi dynasty that has ruled India for most of its 65 years of independence, campaigned tirelessly to revive his centre-left party in a politically crucial state where it has not held power for 22 years.

Congress, which heads the federal coalition government, won only 22 of Uttar Pradesh’s assembly seat in the last poll.

The party’s setbacks in Uttar Pradesh and the other states could make it harder for Prime Minister Manmohan Singh’s already weakened coalition government to pursue reforms that could shore up economic growth, which has slipped below 7%.

Congress spokesman Singhvi strenuously defended Gandhi’s electioneering despite the disappointing results. “Not even Rahul Gandhi’s worst enemies, political or otherwise, suggest that his leadership was lacking. He was outstanding,” he said. “He’s gone to every nook and cranny, he’s provided the spirit, the euphoria, the leadership – if it doesn’t translate, then it doesn’t translate.”