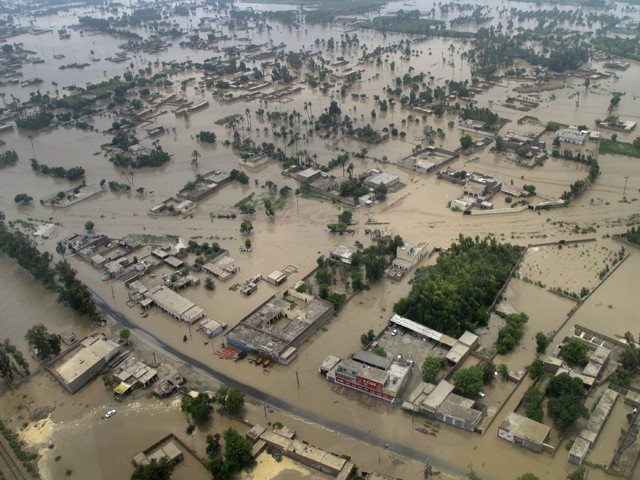 The country’s worst floods in living memory inundated more cities, increasing the number of deaths as it passed from Punjab to the Guddu Barrage on Wednesday.

The floods have not caused considerable damage to the Guddu Barrage, irrigation authorities said. Officials added that some areas between the Sukkur and Guddu barrages were inundated. Earlier in the day, after a special cabinet meeting, government officials said the next couple of days are critical for Sindh. A new spell of monsoon rains combined with floodwaters may lead to a crisis beyond all estimations, the government said.

“Heavy floodwaters are reaching Sindh. Thursday is important. We will have to see how much rains add to that. Some hill torrents from Balochistan are also aggravating the problem,” State Information Minister Sumsam Bokhari told journalists after the meeting.

Chaired by Prime Minister Yousaf Raza Gilani, the cabinet meeting directed all concerned departments to be alert to make sure all victims are reached and relief activities stepped up. However, the cabinet fell short of announcing any relief package for the victims. Bokhari said the announcement will come once damage assessment is made and water recedes. The particular threat for the province, the minister added, is a breach of the Sukkur Barrage. “We must all pray for the Sukkur Barrage. It is in close proximity of the city.” Bokhari expressed fears and said the prime minister had ordered water and power minister to be in the town until the floods pass.

The minister did not say what would be the maximum repercussions if the dam is broken and what pre-emptive measures could be taken to avert the breach.

Some insiders, however, told The Express Tribune that the plan is to blow up one of the safety walls around the dam. The government is considering a mass evacuation from the city to minimise death, in case the safety walls are blown up to reduce the pressure on the dam, they added.

Meanwhile, Met authorities have predicted more rains in Balochistan and in areas of Sindh from which the floodwaters will pass.

“This can complicate the situation,” said Qamar-uz-Zaman Chaudhry, the chief of Pakistan metrological department, at the news conference with Bokhari.

Meanwhile, a United Nations (UN) agency said most survivors from Khyber-Pakhtunkhwa are still to be reached and the majority of the people are vulnerable to hunger and water-borne diseases.

Bokhari said the cabinet has directed the health ministry to be pro-active and start vaccination in areas where chances of an epidemic outbreak are imminent.

Also on Wednesday, heads of foreign missions in Islamabad were called to the foreign ministry to formally seek international help. They were briefed there by the head of the National Disaster Management Authority.

NDMA chief Maj. Gen. (Retd) later told the media that the government had asked them (foreign diplomats) to deliver aid money to the government of Pakistan instead of the UN agencies.

A statement issued by the Food Ministry said the government had decided to waive off all agriculture loans and taxes in the flood-affected areas. WITH ADDITIONAL INPUT FROM WIRES