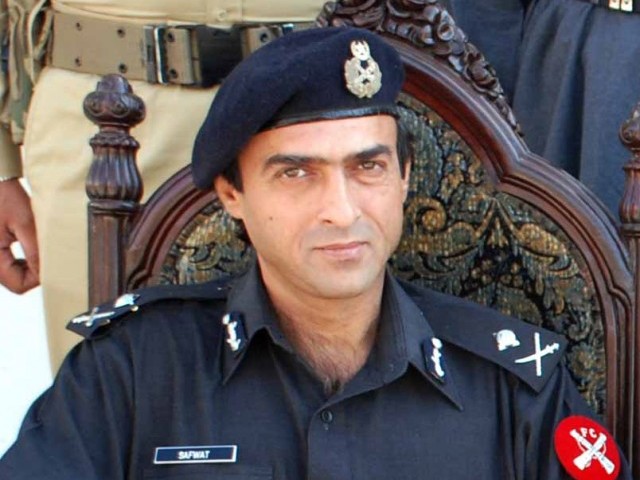 Government will award Ghayur the Sitara-i-Shujaat for his services for the country. PHOTO: ABDUL GHAFFAR BAIG/EXPRESS

PESHAWAR: The funeral prayers of FC Commandant Sifwat Ghayur have been offered at the Police Lines in Peshawar.

Ghayur was martyred on Wednesday when a suicide bomber rammed into his vehicle in the Saddar area.

The Khyber Pakhtunkhwa government has announced a one-day mourning.

The late FC commandant was the cousin of KP Governor Owais Ghani and a brother-in-law of Aftab Ahmed Khan Sherpao.

He had also served as the Peshawar CCPO and a deputy director of the Intelligence Bureau.

The interior minister has announced that the government will award Ghayur the Sitara-i-Shujaat for his services for the country.

The commandant of the Frontier Constabulary (FC) Sifwat Ghayyur and three other people were killed and 11 injured in a brazen suicide attack at a busy roundabout in the cantonment area of Peshawar on Wednesday.

“Sifwat Ghayyur drove out of his office situated on Sunehri Masjid Road. As soon as his vehicle stopped at a traffic signal, a teenage suicide bomber walked up to it and detonated the explosives strapped to his body,” Superintendent of Police Shafiullah Khan told journalists.

Khan said they have found the head and severed legs of the bomber.

Medics at the Lady Reading Hospital (LRH) told The Express Tribune that they received 13 casualties. Two of them were dead, while the remaining were wounded, four of them critically. The body of Ghayyur was taken to the nearby Combined Military Hospital (CMH) for autopsy.

“I was crossing the road when the suicide bomber walked over to the car of the FC chief which had just stopped at the traffic signal and detonated the charge,” Khan Muhammad, one of the injured told The Express Tribune from his bed at the LRH. “The car caught fire following the blast and I saw a head and severed legs at the site,” he added.

Senior Minister Bashir Bilour said the suicide attack targeted Sifwat Ghayyur. “We have lost a brave and great officer. He came out of his office and was targeted here,” he told journalists outside the FC headquarters.

“Terrorists have changed their strategy. Now they are carrying out targeted killings of senior government officials,” Shah told journalists at the LRH.

However, he said the government would not bow down to terrorists and the fight against militancy would continue till the last terrorist was eliminated. Officials from the Bomb Disposal Unit (BDU) said that around eight kilogrammes of explosives were used in the attack. Witnesses said that at least two vehicles could be seen in flames and a traffic police motorcycle thrown on its side after it had been sent flying across the road. Windowpanes of the nearby Deans Trade Centre were also smashed by the thud of the blast.

One witness said that he saw the explosion after a car approached the vehicle in which Ghayyur had been present.

Express News broadcast CCTV footage of a white car moving slowly on the road before the blast. A huge explosion erupted when the car neared two other cars seemingly parked on the side of the road.

On December 19, 2006, gunmen shot dead DIG Bannu Abid Ali and his driver in the Sra Khawra area on the outskirts of the city.