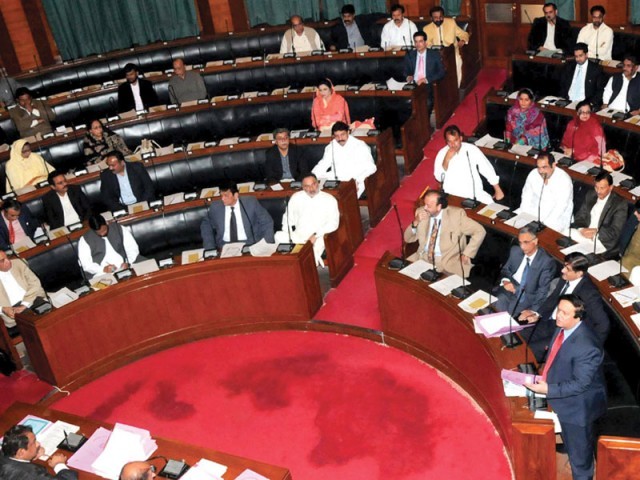 The Election Commission failed to do a tidy job as the new electoral rolls are full of errors and discrepancies. All the MPAs in the Sindh Assembly agreed on this fact. PHOTO: RASHID AJMERI/EXPRESS

The Election Commission failed to do a tidy job as the new electoral rolls are full of errors and discrepancies. All the MPAs in the Sindh Assembly agreed on this fact in its session on Monday.

Several lawmakers questioned the authenticity of these lists and expressed reservations over the process of their verification. They demanded that the government to extend the deadline for verification at least by one month.

As the MPAs agitated on the issue, Speaker Nisar Khuoro assured them that the assembly secretariat will take up the matter with the Election Commission of Pakistan (ECP) and the federal government to extend the deadline for the verification process by a month.  “I am the Speaker of this house, but my vote has also not been registered in the revised rolls,” he informed the house.

Dr Ahmed Ali Shah of the ruling Pakistan Peoples Party set the tone of the Q&A session when he diverted the attention of the house towards major discrepancies and errors in the new electoral rolls.

“There are massive irregularities in the voters’ lists. I am pursuing the whole process and have found that not only the votes of people belonging to my areas are missing, but display centres have also not been established so far,” Dr Shah, who belongs to Naushero Feroz district, said.

He said that the display centres were to be set up at the offices of union councils and government school buildings, but nothing had been done so far. “Many bogus votes are still there. We request to extend the date for verification so that transparent electoral rolls can be prepared,” he added.

Another PPP-MPA Ghulam Qadir Chandio also complained against ‘massive irregularities’ in the electoral rolls. “Votes of our people including former Taluka nazim’s family have been registered in Balochistan.

I appeal to the authorities concerned to please correct it as soon as possible,” said Ghulam Qadir. Anwar Mahar of PPP said that earlier his vote was registered in Sukkur division, which is now missing in the revised rolls.

Shoaib Bukhari of Muttahida Qaumi Movement (MQM) suggested to check the status of their votes through SMS services. “Election Commission has made it easy. You should put your CNIC number and text to 8300.  You will instantly get the information about your vote,” he said.

But Speaker Khuhro said that majority of the people in rural areas do not have access to the mobile phones. “I will advise the commission and Nadra to initiate a massive campaign to create public awareness by using radio, TV and newspapers.  He asked the MPAs to visit their constituencies and check for discrepancies.

Law and Parliamentary Affairs Minister Ayaz Soomro admitted that there were discrepancies in the voters’ lists and assured that government will write to the ECP, Nadra and all others concerned to extend the verification date.

For the first time in four years, the Sindh Assembly rejected former Chief Minister Arbab Rahim’s leave application. This suggests that the government is willing to take action and disqualify him as a MPA. Khuhro was in chair when the application was submitted by MPA Razzaque Rahimoon. According to the application, Rahim could not attend the session because he was ill and could not travel.