US announces $25m for flood relief

US announces $25m for flood relief

So far more than 75,000 strand­ed people have been evacua­ted and moved to safer places, said an ISPR releas­e.
By Zainab Imam / Agencies
Published: August 5, 2010
Tweet Email 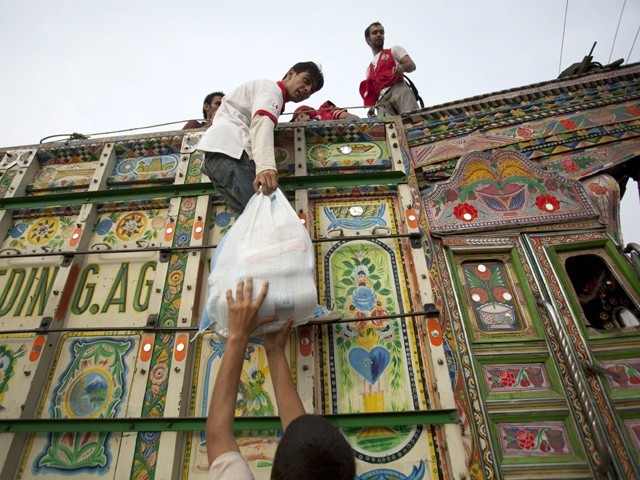 This brings the United States’ total commitment to date to more than $35 million. The money will be provided by USAID to international organisations and established Pakistani NGOs to provide food, health care, shelter for those displaced by floods.

The number of people hit by floods in generations has risen to four million, according to UN estimates and UNHCR revealed that over 1400 people have died.

So far more than 75,000 stranded people have been evacuated and moved to safer places, said an ISPR release on Thursday.

Sixty additional life saving boats have been transported from Lahore to Multan and Sukkur for evacuation and rescue activities.

In Khyber- Pakhtunkhwa, 18 helicopters are busy in distributing rations and evacuating the marooned people from Kalam.

Eight trucks of 25 tons of rations each have reached Tarbela Ghazi for further distribution among the affected people, while army Engineers are busy in making temporary bridges on River Swat to facilitate the transportation.

People stranded at inaccessible places are being provided food through Helicopters and even Animal transport is also being employed.

Over 2000 Pakistan Army officers and Jawans have so far shifted over 100,000 men, women and children to safer places with the help of five helicopters and 130 boats from flood-hit areas of South Punjab said another ISPR release.

Thousands of people are still trapped as water level is continuously on the rise in Kot Addu. The army is engaged in relief efforts but some people are also leaving the affected places on their own.

About 160,000 wheat bags were  soaked in the deluge at Pasco Centre. This came as a breach in Muzaffargarh canal in the Mehmood Kot, Ganji Wala Bridge and Basirwala areas.

Gujrat district in Muzaffargarh will remain under threat until the breach is not repaired. Lal Pir Thermal Power Plant, Pak-Arab Refinery Corporation and Oil Depot can also be affected.

In Rajanpur, people in the area are still waiting for relief as upto 40,000 cusecs of water has affected the district.

The worst affected area of Rajanpur is Jampur tehsil where half of the city has been submerged. At least 1400 police officials are busy in helping the flood victims in the tehsil.

Meanwhile, Dajil city is under threat as holes have appeared in four areas of the lake adjoining it. Rujhan dike also collapsed on Wednesday which has posed an additional threat to the city. Kot Mithan is also being steadily inundated.

The District administration has given last warning to the people who are are not evacuating their homes near the banks of the Indus River.

Increasing water levels are exerting pressure on dykes near Kandhkot but the Sindh government has announced that all protective embankments are safe in the province.

According to the Flood Warning Cell, there is a mid-level flood in river Kabul, with water flow at 170,000 cusecs in the areas of Nowshera and Udezai.

Relief items including clothes, edibles and drinking water worth millions of rupees have reached Peshawar.

More than 30,000 people had to be uplifted through helicopters and fourteen thousand, five hundred and fifty three families have been accommodated in camps.

Heavy rain spell continues in district Jafferabad and Naseerabad of Balochistan for the third consecutive day.

Rains have also started in district Loralai, Duki, Nana Sahab, Ziarat and Luni. About 70 feet wide breach has appeared  in the Ouch canal in Jafferabad district. Many areas have also been inundated.

Deaths are also being reported in rain related accidents. A woman and a child were killed when the roof of their house caved in due to heavy downpour in Sohbatpur .

Water continues to wash away villages in its trail

An initial surge of flood water inundated Punjab on Wednesday, breaking 10 embankments and flooding hundreds of villages across the province.

More than 400,000 people were affected in Taunsa and Dera Ghazi Khan when as many as 160 villages were inundated. About 200,000 people had to seek refuge in mounds and schools and there are warnings that the DG Canal Link No 1 and RDA 138 and 139 might break. The canal has already broken from points 198 to 210.

Flood water caused an embankment of Muzzaffargarh Dam to break causing flooding in Kot Addu where people were evacuating on a self-help basis. The surge is now expected to arrive at Nishtar Ghat in Rajanpur, creating a serious threat for Mithan Koth, Rojhan, Kotla Mughlan and Umar Kot where protective dams are being strengthened.

In Rajanpur, 150 villages were submerged and hundreds of people are besieged in water as relief work is hampered by rain.

Sukkur DCO Inamullah Dharejo said on Wednesday that Sindh Chief Minister Qaim Ali Shah and district government officials had set up permanent camps in Sukkur to cope with the flood situation. The Provincial Disaster Management Authority (PDMA) was the focal agency for coordination and they had established a 24-hour control room.

Dharejo said that they were coordinating with the armed forces and they had also prepared their own support system. The Sindh government has put 155 boats and 50 dewatering sets at the Pakistan Army’s disposal, he said.

Responding to a question, the DCO said that until Wednesday, up to 80 per cent evacuation had been carried out from the katcha areas. “Those living in areas outside protective bunds near the river belt should also be on alert,” he said.

Meanwhile, 164 medical camps have been established in districts that are under threat of flooding.

Khyber-Pakhtunkhwa Information Minister Mian Iftikhar Hussain said on Wednesday that funds provided to the provincial government for reconstruction of flood-ravaged areas were insufficient.

“While allocating funds, the government should be mindful of the fact that 95 per cent of flood damage had been suffered by Khyber-Pakhtunkhwa and only five per cent was suffered by other provinces,” he said.

Hussain asked the people not to listen to ‘rumours’ and wait until government announcements. “The death toll registered with us is 797 while 790 are injured. More than 700,000 people have been rendered homeless, while 568 villages were washed away by raging torrents, affecting more than 500,000 families,” he said.

Speaking about damage to the province’s infrastructure, he said that 200 roads, 92 bridges, 85 educational institutions, 32 health centres, 32 irrigation schemes, 11 government buildings and five grid stations had been destroyed. Meanwhile, the Provincial Disaster Management Authority (PDMA) said on Wednesday that the flow of rivers in the province was declining. (With reporting by Manzoor Ali in Peshawar)