Abbottabad operation: Zardari, Kayani deny prior talk on May 2 raid

Abbottabad operation: Zardari, Kayani deny prior talk on May 2 raid 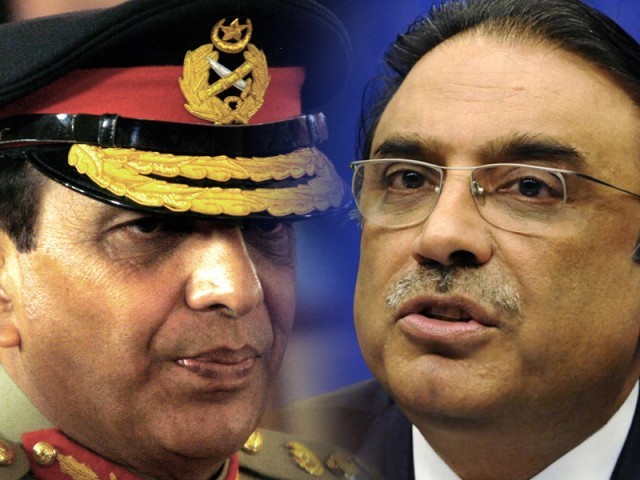 Mansoor Ijaz says he mentioned an exchange of calls, not direct conversation between the two offices.

The Presidency and the General Headquarters may be physically apart, but appeared on the same page in denouncing allegations purportedly made by Memogate whistle-blower Mansoor Ijaz.

Following Ijaz’s statements to reporters in London on Friday, both President Asif Ali Zardari and Chief of Army Staff General Ashfaq Parvez Kayani denied talking to each other on the night of May 1 and May 2.

Presidential spokesperson Farhatullah Babar claimed that media reports about Zardari making a phone call to Gen Kayani on the night of the US-led raid were “absolutely untrue and unfounded.”

“A section of the media has carried reports implying that President Asif Ali Zardari had, through a phone call on the night of the May 2 raid, informed the army chief that the operation had been conducted with his approval, are absolutely untrue.”

For his part, Gen Kayani, too, issued a statement through the military’s media arm, the Inter-Services Public Relations. The statement read that “referring to the statement of Mansoor Ijaz as reported in the media, there was no telephone conversation between the president and the COAS on the night between 1 and May 2, 2011.”

The statement added that the “military leadership has briefed the joint session of parliament on the subject matter and there is nothing more to add to it.”

In response to the statements of the military and Presidency, Ijaz clarified that their denials were based on a set of assumptions.

In an email made available to The Express Tribune, he said the transcript never mentioned a direct call between President Zardari and Gen Kayani. There were only repeated mentions of calls between the offices of the two men, but none that took place directly between them.

He said the exchange of calls was relevant for the commission investigating the scandal since it was one of the several factors in his decision to ask General James Jones to forward the memorandum to Admiral Mike Mullen.

Asked during cross examination in Friday’s hearings whether President Zardari had prior knowledge of the operation, Ijaz declined to answer until the authenticity and truth of the document was determined.

The email continued that ISPR and the Presidency picking up on one specific point, based on media reports of what was contained in the transcript, demonstrated continuing distortions in search for truth about the alleged complicity of President Zardari in the memorandum affair.