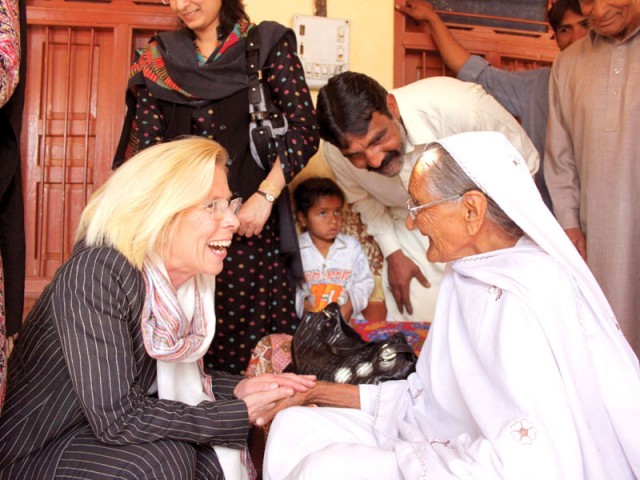 Ambassador of Norway to Pakistan Cecilie Landsverk meets the families of Norwegian-Pakistanis in Kharian. PHOTO: COURTESY OF THE NORWEGIAN EMBASSY

Kharian is known as one of Punjab’s most important cantonments. What many people do not know is that this town of over 80,000 is also called “Little Norway” because of the number of people who have links with that country. Over the years, thousands migrated to Norway from Kharian and now it is an important place to visit for any Norwegian envoy to Pakistan.

On Thursday, Ambassador of Norway to Pakistan Cecilie Landsverk made that pilgrimage and seemed very excited to meet the Norwegian-Pakistanis that live here.

As she entered the little village of Ogarian in Kharian, she was greeted by Aslam Ahsan, a Norwegian-Pakistani, and his family at his residence. To greet the ambassador in a traditional manner, her car was escorted by a dancing horse. As soon as she stepped out, one was treated to another unusual sight. A man looking like a typical Pakistani farmer in his shalwar kameez and shawl around his shoulder greeted and conversed with the ambassador in Norwegian, with the rest of the family doing the same. “They look Pakistani but they are Norwegians,” said Landsverk.

In a small country like Norway with a population almost close to 5 million, there are between 40,000 and 50,000 Norwegians of Pakistani origin. Of this, more than 70% belong to Kharian, hence the name “Little Norway.”

Back in Norway itself, Landsverk said that the Norwegian-Pakistanis worked in almost every field – from being the vice president of the parliament to working in cutting-edge technologies like the communication sector, to politics, movies and as taxi drivers. She informed her hosts that Pakistanis were one of the first ethnic groups to come to Norway from the outside and had introduced a new culture.

Landsverk said that it was very important to acknowledge the feelings of these people who have contributed to the development of Norway but at the same time have stayed connected to their roots. Landsverk, however, pointed out that her government did not focus on this area alone for assistance. “There are other challenges in Pakistan and we are investing in them.”

She also said the focus was now more on education. She said although Norway was a rich country because of its oil reserves, it was developed because of its education. The envoy said that more needs to be done on institutional building between universities. They are in the process of connecting the University of Gujrat with the University of Oslo to understand each other better.

There is a potential for investment in Pakistan, especially in energy projects and fish-farming, she said, adding that Telenor was the most important and biggest investor in Pakistan today.

A large number of people from the village had gathered to meet the ambassador. As she walked through the village, people looked on from windows and from rooftops and most just kept on joining the crowd as she went around the village, like some local hero being welcomed. Her visit took her to a primary school and then to the Kharian Press Club. Banners were put up to welcome the ambassador and she was greeted with flowers. She then planted a sapling at the press club and the crowd cheered. “I am intoxicated with flowers. I have never been greeted this nicely. I’m honoured,” the Ambassador remarked.