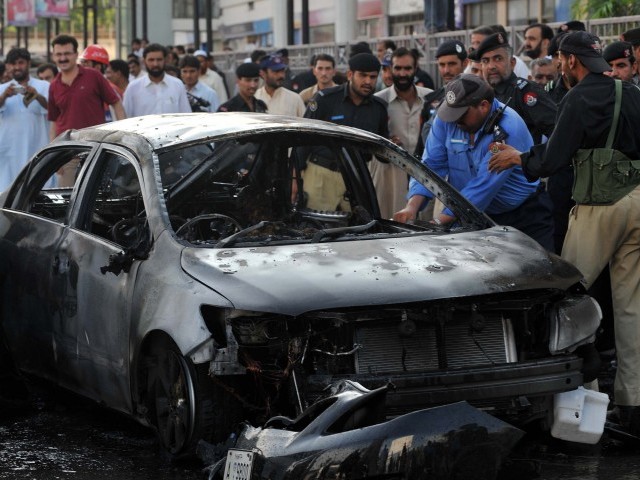 A suicide bomber killed Sifwat Ghayoor, the chief of the Frontier Constabulary and three other people in an attack on his car in Peshawar on Wednesday.

The Taliban claimed responsibility for the killing and threatened further targeted assassinations, in what could be a new tactic for the country’s most active militant group, often blamed for mass-casualty bomb attacks.

The body of what appeared to be a teenage boy lay at the bomb site. His head and legs were severed, an AFP reporter said.

At least two vehicles could be seen in flames and a traffic police motorcycle thrown on its side after it had been sent flying across the road.

“The suicide attack targeted Sifwat Ghayoor and he has been martyred,” Bashir Bilour, senior minister of Khyber-Pakhtunkhwa told AFP.

“We have lost a brave and great officer. He came out of his office and was targeted here,” he said outside the Frontier Constabulary headquarters.

“We are investigating whether the suicide bombers were one or two. We will also see whether he was on foot or sitting in a car.”

Police said two more people were killed and 11 others wounded.

Ghayoor was a highly regarded commander of the Frontier Constabulary. He was also former CCPO of Peshawar,

“We killed him, he was our target… all such officers who are active against us will suffer the same fate,” Azam Tariq, a spokesman for Tehreek-e-Taliban Pakistan, told AFP by telephone.

The precise nature of how the attack was carried out remained unclear.

“It seems the attacker was on foot. He was 13 to 14 years old and he blew himself up near Sifwat Ghayoor’s car, but we are still investigating it further,” Shafqat Malik, bomb disposal chief in Peshawar, told AFP.

CCTV footage showed a white car moving slowly on the road before the blast. A huge explosion erupted when the car neared two other cars seemingly parked on the side of the road.