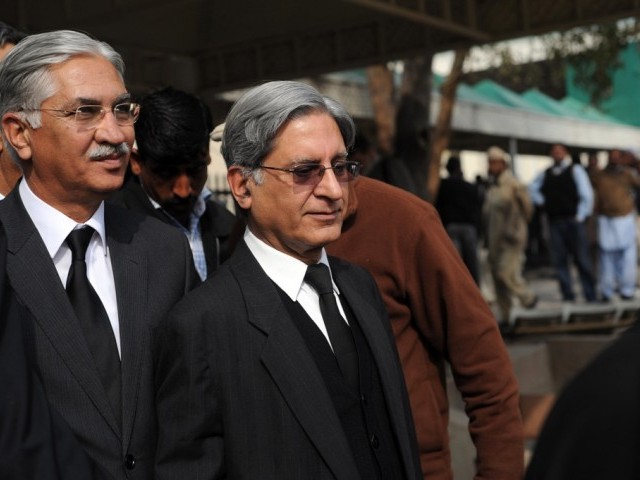 The premier is safe – to oversee the Senate elections at least.

Objecting over the prosecution’s failure to produce any witness in the contempt of court case, Prime Minister Yousaf Raza Gilani’s defence counsel, Barrister Aitzaz Ahsan, managed to buy more time from the apex court on Tuesday.

Experts present in the courtroom termed it Aitzaz’s first victory in the case thus far.

“The prosecutor did not summon any witnesses. Thus, I have been deprived of the right to cross-examine them,” Aitzaz said.

The court allowed him to bring in the witnesses, but Justice Sarmad Jalal Osmani said it was ‘useless,’ if the prime minister does not agree to implement the court’s orders in the National Reconciliation Ordinance case.

“This bench is not for the implementation, but to hear contempt charges,” Aitzaz replied.

“My mandate is to prove that the prime minister did not flout any order of the Supreme Court willfully,” he added.

The premier should be granted a chance to provide a complete defence to prove himself ‘not guilty,’ he submitted before the bench, which accepted his application to call the Defence and Cabinet Secretary, Nargis Sethi, as a witness.

Sethi has also served as principal secretary to the prime minister.

If the summaries referred to in my application are accepted by the apex court, I will win the case, said a confident Aitzaz while speaking to the media after the hearing.

He had filed an application on Monday, asking the court to bring in three witnesses – Sethi, former law minister Babar Awan and Law Secretary Masood Chisti – and to allow them to present two summaries in the court.

The summaries were sent by secretary and minister of law and justice to the prime minister’s office, advising him “not to write the letter to prosecutors in Switzerland.”

Aitzaz said the court accepted his application and has allowed a key witness to appear.

“The court has allowed me to present the summaries. Nargis Sethi will appear before the court and prove them,” he said.

The other two witnesses – Awan and Chisti – however, have refused to appear before the court, Aitzaz said.

Will the premier make another appearance before the court?

The accused does not have to appear personally till the very end of the proceedings, after all the witnesses have recorded their statements, Aitzaz responded.

The counsel will cross-examine Sethi on March 7, the next hearing of the case, where Sethi would record her statement before the seven-member bench.