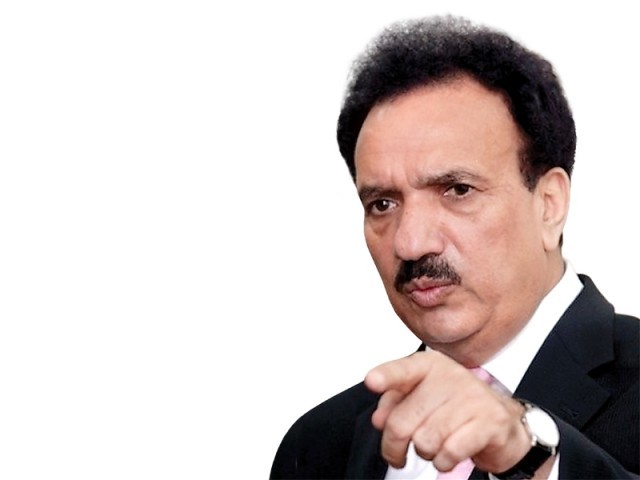 He however did add a new revelation – one that involves one of the largest seminaries in Pakistan, Darul Uloom Haqqania in Akora Khattak.

Malik was briefing Sindh’s lawmakers on the findings of the investigation report on the former prime minister’s assassination. The Sindh Assembly had unanimously passed a resolution last week, calling on the federal government to make the report public.

They spoke about formation of the Tehreek-e-Taliban Pakistan, the links of those accused in the case to the noted Darul Uloom Haqqania  and the forensic evidence compiled.

The briefing also noted the background in which Benazir had arrived, and Musharraf’s opposition to her arrival before the elections.

Malik blamed Musharraf for creating an enabling environment by not providing Benazir security, and Mehsud for ordering the killing.

The government is in talks with Interpol to bring Musharraf back to the country through the issuance of a red notice, he said.

Despite its thoroughness, however, neither the report nor the briefing had any revelations vis-à-vis the primary question – who killed Benazir Bhutto?

“We will always have questions until those responsible are brought to justice,” Sindh Assembly Speaker and PPP leader Nisar Khuhro said at the end of the briefing.

Malik did, however, attempt to absolve himself, and the ruling Pakistan Peoples Party, of any blame, and convince the electorate that the party had not put the issue on a back burner.

The latter was confirmed when Sindh Local Government Minister Agha Siraj Durrani said: “No one can say now that we did not do anything.”

When asked why a post-mortem had not been ordered, Malik blamed the police officers.

“The doctor requested the police officer on duty thrice to do a post-mortem, but the officer did not allow him. We are prosecuting the officers responsible for the negligence,” he said.

A slide in the presentation noted that Naheed Khan, Benazir’s secretary, was responsible for security at the December 27 rally at Rawalpindi’s Liaquat Bagh. While Khan’s role was not scrutinised, a lawmaker questioned what Malik’s responsibilities were. He said he acted as a liaison officer, and was not at every rally of Benazir’s.

“Because she had made me a member of the Central Executive Committee, she told me to start attending rallies and come along. That’s why I was there,” the interior minister said.  He also refuted the charge that the car he was in had sped away from the assassination scene and blamed the previous government for its negligence in providing Benazir security and not letting the PPP hire private security.

However, a US embassy cable released by WikiLeaks had stated that while the US had recommended three security firms to the PPP, her chief of security, retired Major General Ahsan, said “that he and the PPP are completely against any outside organisation overseeing their security and that he only trusts PPP personnel.”

Malik told lawmakers that many of those contacted to give their statements never came forth – including Afghan President Hamid Karzai, an official leader of a ‘Muslim country’ and former US Secretary of State Condoleezza Rice.

“Karzai sent Mohtarma [Benazir] a message that her life was in danger. But when we asked him to give a statement, he refused. So did this Muslim country that had sent a letter [about the threat]. I have lodged my protest. We approached Condoleezza Rice through the US and were told she would not give a statement.”

Rice’s statement was essential because she was “responsible for the reconciliation”, Malik said, as he elaborated his own role as a ‘liaison officer’ for Benazir, who began talks with Musharraf, the Muttahida Qaumi Movement and other political parties for her return.

Malik also talked about the chronically contentious National Reconciliation Ordinance. “This NRO which is used against the PPP…. I can swear it was not Benazir Bhutto who approved the NRO draft,” Malik said.

“She wanted reconciliation and a truth and justice commission, which is in the Charter of Democracy as well. I spoke to General Hamid [Javed, Musharraf’s chief of staff] and told him that Benazir Bhutto does not agree to the draft,” he said.

“Then we were told to speak to Chaudhry Shujaat Hussain and Mushahid Husain. But Benazir said she did not agree because she told me that they would use this [the NRO] against the PPP later,” he added.

Malik said that retired and serving generals as well as the PML-Q leaders were available to speak on this.  He also said a military official visited Benazir a night before the December 27 rally to speak about the upcoming elections, but she did not agree with his stance.