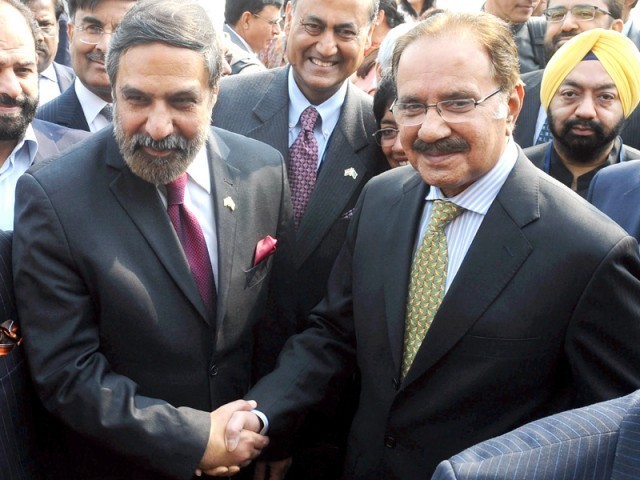 It was the first visit by an Indian commerce minister to Islamabad in three decades  but the firsts did not end there.

The neighbours signed three trade pacts and laid the groundwork for not only opening more land trade routes, but also bank branches in each other’s countries for the first time since their creation.

Representatives of the central banks are scheduled to meet in Mumbai next month to discuss this, said a joint statement issued after the talks.

“We are looking at doing more, including the opening of the bank branches, for which the two (central) banks are in dialogue and structural and institutional framework will be put in place soon,” Indian Commerce Minister Anand Sharma told reporters.

Sharma, who crossed into Pakistan through Wagah Border last Monday along with 150 delegates, arrived in Islamabad after interacting with the business community in Lahore and Karachi.

He held talks with his Pakistani counterpart Makhdoom Amin Fahim on Wednesday.

In a bid to further trade ties, the two countries signed three pacts – a customs cooperation agreement, a mutual recognition agreement and a redressal of trade grievances agreement.

These agreements were signed on the insistence of Pakistan’s business community that had complained about non-tariff barriers, particularly those regarding quality control and customs procedures.

Pakistan’s Cabinet on Tuesday had approved the signing of the three agreements but deferred a decision on switching over from a positive list of 1,945 tradable items, to a negative list of 636 items barred from trading, after some stakeholders expressed reservations.

It has been agreed that Pakistan will move from a positive list to a small negative list by the end of February, said the joint statement.

The negative list is to be phased out gradually and the timing for that will be announced by end of February, it added.

The complete phase-out that will automatically lead to full normalisation of trade relations, commonly known as the most-favoured nation (MFN) status, will be done before end of this year, the joint communiqué said. Once Pakistan notifies a small negative list, India will, within four months, consider tariff liberalisation, the statement added.

“These agreements will facilitate free flow of trade and we have also looked on multiple visas for (businessmen),” Sharma said, adding that neighbours have to be natural trading partners. Both sides agreed to explore the opening of the Munabao-Khokharapar route for trade, as desired by the Indian side.

A joint working group will be constituted in this regard which will report to the respective governments before the next round of talks between commerce secretaries.

To a question on barring Pakistan from investing in India, Sharma said that investments would be allowed “once economic engagement deepens.”

Pakistan’s Commerce Secretary Zafar Mahmood said the process of trade normalisation is well on course but it is “time-consuming, hazardous and requires patience.” (With additional input from AFP)

Camped: In search of their loved ones – some have clues, others just allege agencies