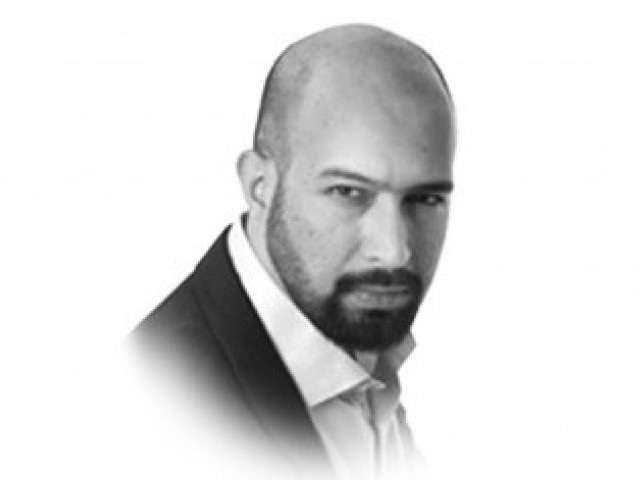 The writer is a freelance journalist and a partner at Core Consulting (wajahat.khan@tribune.com.pk)

It’s official — Pakistan is undergoing a midlife crisis. The bad boy of international geo-politics has outlived its best years and the decades of naughtiness are starting to show. Having lost his founder-father – henceforth, ‘Daddy’ – at an early age, Pakistan – henceforth, ‘Pak’ – drifted into a vicious cycle common in juvenile offenders: bad friends and bad habits.

As Daddy left little inheritance, chronic overspending led our protagonist to dependence on scoring hits by borrowing from whoever was around. The streets were rough then. A loud, brash white boy, Yank, was the big player on the Westside of town. He reached out to whoever could afford him by a ‘Sign On Treaty’. Pak didn’t mind a far-off stranger selling him mediocrity at high-rates, at least someone ‘had his back’.

During this formative phase, Pak developed an appetite for all types of goodies: aid and aircraft, tube-wells and tanks. Pak could smoke, shoot, sniff, snort, rip, cut, and eat whatever feel-good product the Westside churned out. Loaded with the delusions of a venerable narcotic fiend, Pak started to imagine himself as stronger than he actually was.

One day in 1965 he decided to take on his nemesis and stepbrother, Indy.  Indy and Pak had issues that went way back. The story was simple: Mother Hind had married two different wooers: Mos and N-Du. A powerful and eclectic woman, she thought such a lack of marital Puritanism was kosher as long as she kept everyone happy. But Pak’s Daddy said that because they had two different ancestors, Mos and N-Du could never live together. Thus, Pak and Indy came about. One mother, two fathers: the neighbourhood got smaller, especially for Pak.

To wrap up Pak’s midlife crisis: it was that drug-induced fight in ‘65 that led our protagonist to find a new supplier — a mysterious Eastsider who went by the initials PRC, or as Pak liked calling him, Mean Cheen. Because Yank hadn’t lived up to his Treaty and failed to bail Pak out in ‘65, Pak and Mean Cheen hit it off. But Pak missed Yank’s wares and Yank would hire Pak whenever he had an odd job and pay with the latter’s favourite: goodies.

The job that really got Pak was the Kabul Heist. Pak used too much variety, too quickly and too long. Yank’s goodies were mixed with Saud’s stash, Mean Cheen’s tech was ripped with Af-Goon’s finest white stuff, the Poppy. And the chrome — the Kalashinkov, which means ‘Bad News’ in street talk — became a fixture of Pak’s gear. While ’65 was a single exercise in delusion, followed by self-inflicted fire in ’71 that burnt up half of Pak’s crib, the perpetually high-and-happy wave that Pak started riding in the ‘80s has now become his chronic, self-induced cancer. What were once Pak’s bearded toy-soldiers are now his ghouls. Worse, Pak is surrounded. Yank and Brit have subjected his sidekick, Af-Goon, to a hostile takeover. Indy, who stayed clean those early years, is now dealing himself – slinging for whoever can afford him – and has a lot of takers. Mean Cheen, a martial-art-disciplined type Eastside boy, is loyal but sensible enough to stay clear of poor, hurting Pak.

In the global gangland – with his dependencies breaking him and his ghosts haunting him – Pak seems to be in a state that the locals call ‘lit up’. But on the Westside, Yank has come up with a preppie term that is making the rounds with the rich folks: ‘Failed State’.

Once upon a time in Peru