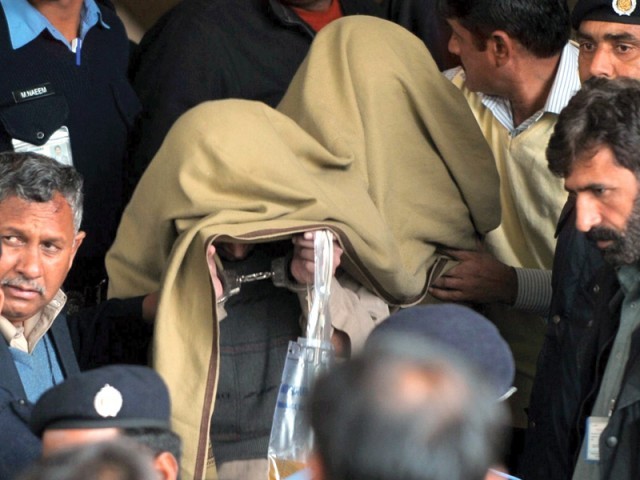 Policemen escort men, seen draped in a shawl, after an appearance at the Supreme Court in Islamabad. PHOTO: AFP

Everyone in the jam-packed courtroom number 1 was dumbfounded when authorities escorted them inside — each of the seven surviving detainees holding urine bags in their hands.

Frail, weak, unable to talk and walk properly, the physical condition of the once missing prisoners – brought before the Supreme Court on Monday by the country’s top spy agencies – seemed abysmal.

Four of his fellow detainees have already died in custody.

As the prisoners appeared before Chief Justice Iftikhar Muhammad Chaudhry – more than a year and a half after being picked up – he ordered a full medical examination. The Inter-Services Intelligence Agency (ISI) and Military Intelligence (MI) last month handed over the men to the custody of the Khyber-Pakhtunkhwa (K-P) government, after the Supreme Court took up the case.

“These people have been languishing in torture cells for over one and a half years,” Advocate Tariq Asad told the court, adding that, during confinement, the prisoners were not exposed to sunlight which deteriorated their health.

Resuming the Adiala missing prisoners’ case, the apex court sought written explanations from the ISI and MI chiefs, Judge Advocate General (JAG) and K-P Chief Secretary Ghulam Dastagir Khan regarding the details about the prisoners and why they were not presented on the court’s earlier order.

“I have severe pain in my chest, my shoulders are itching. I am still shocked and unwell,” another detainee told AFP.

Meanwhile, the court told the K-P chief secretary to submit a comprehensive report entailing the details of the detention and a medical board report of the detainees within four days, while the JAG, MI and ISI were told to submit their reports on March 1.

The court directed the ISI and MI chiefs to satisfy the court as to how they had held the 11 prisoners, what sort of trial was conducted, how they dealt with them and why their health conditions were deteriorating.

“My son was kept in Parachinar in an open room where temperatures were below zero degrees,” one of the detainees’ mothers told The Express Tribune.

The chief justice then inquired about the prisoners and asked where they were before January 26. K-P chief secretary replied he did not have any knowledge regarding the whereabouts of the prisoners.

The chief justice criticised his statement and said, “A provincial chief secretary should be aware of everything that happens in the province.”

“A medical board shall be constituted to examine their health.”

Counsel of the prisoners Advocate Asad informed the court that three out of the seven prisoners were suffering from kidney failure, while the rest had been diagnosed with other chronic diseases.

Defence of Human Rights Chairperson Amina Janjua prayed to the court to order the release of all the missing persons currently detained  in the country’s jails. Meanwhile, the court ordered that prisoners will now remain under provincial administration and not the ISI or MI.

The three-member bench, headed by the chief justice, had served notices to the ISI and MI chiefs on January 25 to explain the circumstances behind the deaths of the four prisoners.

The 11 accused had been facing a court martial under the Army Act on charges of attacking General Pervez Musharraf, the General Headquarters and ISI’s Hamza Camp base. They were picked up from the Adiala Jail by intelligence agencies after they had been acquitted of the charges by the court.

Four of the 11 detainees died in the custody of the ISI and MI, according to one of the detainees.