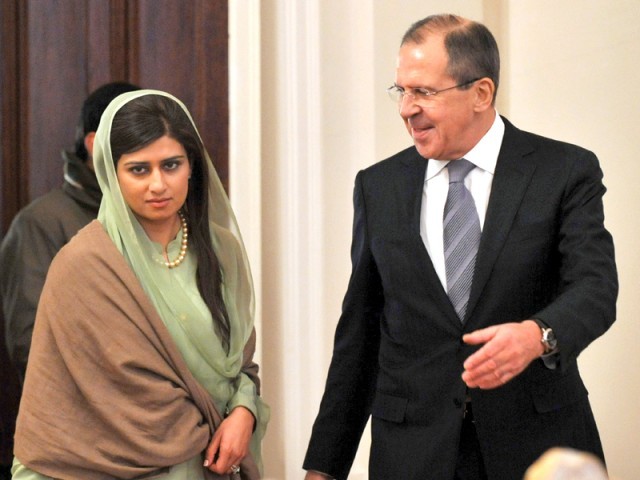 MOSCOW: Pakistan and Russia on Wednesday reaffirmed their commitment and support to promote stability and peace in Afghanistan for ‘Afghan-led and Afghan-owned’ efforts for national reconciliation in the country.

During an official visit of Foreign Minister Hina Rabbani Khar to Russia from February 7 to 9, at the invitation of her Russian counterpart Sergey Lavrov, the two sides expressed deep concerns about the threat of terrorism and drug-related crimes persisting in the region. Khar added that Pakistan had a clear policy to support any Afghan-driven peace initiative.

Khar, on behalf of President Zardari, invited the Russian president to attend the next quadrilateral summit meeting, which is scheduled to be held in Islamabad this year.

According to the foreign office, the two sides held in-depth discussions on a range of bilateral matters, as well as on important regional and international issues of mutual interest.

The two ministers reviewed the progress made on the understanding reached between the leadership of the two countries during President Asif Ali Zardari’s official visit to Moscow in May 2011 and Prime Minister Yousaf Raza Gilani’s meeting with his Russian counterpart on the sidelines of the Shanghai Cooperation Organisation’s (SCO) Heads of Government meeting in November last year.

Taking note of the considerable progress made, both countries agreed that a large potential for enhancing bilateral cooperation still existed, particularly in trade, investment, energy and agriculture.

They also expressed satisfaction on the outcome of the meeting of the Joint Working Group on Energy Cooperation held in Moscow last year. The two sides discussed several concrete proposals including oil exploration, hydropower production/distribution and coal-based power generation projects.

The ministers noted with satisfaction that substantial progress has been made towards finalising the proposed memorandum of understanding (MoU) on Expansion and Modernisation of Pakistan Steel Mills, and hoped that other formalities, including financing of the project, will be finalised soon.