The AVCC found three men who went missin­g in 2011.
By Our Correspondent
Published: February 5, 2012
Tweet Email 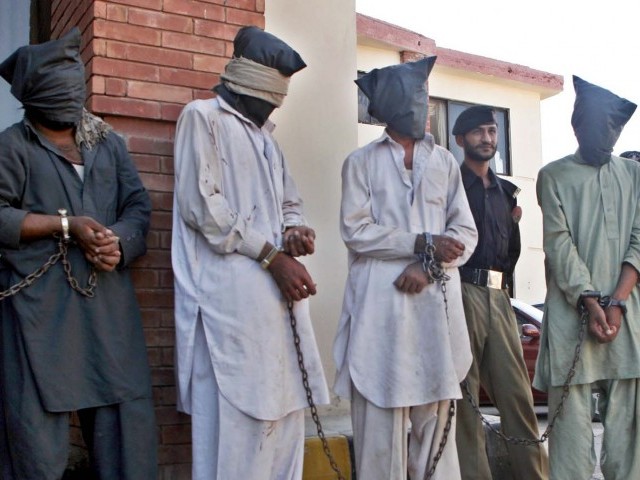 Four alleged members of the Tehreek-e-Taliban, including the commander, Mullah Hakeem, were arrested in a raid carried out by an intelligence agency in Toori Bangash Colony, Orangi Town. PHOTO: PPI/FILE

The authorities arrested nine suspects, including four members of the Tehreek-e-Taliban Pakistan, on Saturday. They also managed to find three Governor House employees who went missing on November 12, 2011.

Four alleged members of the Tehreek-e-Taliban, including the commander, Mullah Hakeem, were arrested in a raid carried out by an intelligence agency in Toori Bangash Colony, Orangi Town. The commander was caught on a tip-off from TTP men. Hakeem was involved in over 100 bomb attacks on schools in Swat. Weapons and jihadi literature were seized from the suspects. The identities of the TTP suspects were not revealed. They were taken to an undisclosed location for further questioning.

In an unrelated incident, the Anti-Violent Crime Cell (AVCC) carried out a raid in Sakran and arrested five suspected kidnappers. They also found Ejaz Baig, Mohammad Naeem and Mohammad Waseem locked inside a house near the forest. New Karachi residents Baig, Naeem and Waseem went missing in November 2011. Their families had registered FIR no. 431/11 under section 365 A of the Pakistan Penal Code at the New Karachi police station but the case was transferred to the AVCC.

According to AVCC chief SP Ghulam Subhani, the kidnapped men were peons at Governor House and were abducted on their way home from work. He said that the suspects had demanded Rs20 million in ransom but came down to five million rupees.

He added that they were able to find the men as their families were cooperating with the Citizens-Police Liaison Committee and AVCC.

The families had contacted the authorities after they received a ransom call from the kidnappers.

The AVCC claims that the Ghaffor Bugti group was behind the kidnappings. Several members of this gang have been arrested by the AVCC in connection with kidnappings in Hub and Sakran.