Court, Aitzaz wrestle over what comes first: Letter or immunity?

Court, Aitzaz wrestle over what comes first: Letter or immunity? 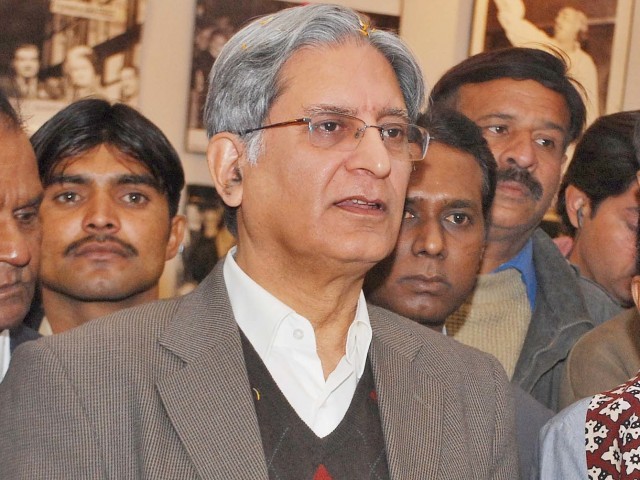 Aitzaz Ahsan, the premier’s counsel, insisted on Wednesday that Prime Minister Yousaf Raza Gilani could not follow the court’s orders until President Zardari was in office, given his immunity under the Constitution.

The court, however, insisted that the premier should have written the letter first, and then invoked the question of immunity.

Both sides, however, skirted around presidential immunity, but were reluctant to raise the question themselves.

During the hearing of Gilani’s contempt case in the apex court, Aitzaz argued that there was a ‘reasonable basis’ due to which the prime minister did not implement the court order, adding that the court order is non-implementable.

The prime minister has not committed any contempt of court by not ordering the National Accountability Bureau (NAB) to reopen Swiss graft cases against President Zardari, who enjoys immunity in the country, Aitzaz reiterated. It is also an international norm and Pakistan cannot throw its president into the foreign fire, he added.

Aitzaz’s additional argument on this issue was also key.

“Gilani was advised by his law secretary to take this step. The prime minister himself is a layman and he cannot read the detailed verdict issued by the court in NRO implementation case,” Aitzaz said.

Justice Mulk, heading a seven-member bench, remarked that, earlier, the prime minister had said in the court that it was his own decision and no one had advised him and had cited Article 248 of the Constitution as a reason for not writing the letter.

Aitzaz replied that the premier appeared before court to show respect but he was not a practicing lawyer. “I am his spokesperson,” he said.

He also presented a section of Article 248 of the Constitution as a basis for not writing a letter to the Swiss authorities.

“Article 248 (1) partly provides immunity to the prime minister,” Aitzaz argued. He also suggested that the NRO case is transferred to Islamabad High Court for implementation.

The court observed that it could withdraw the contempt notice if the NRO verdict, which became the reason for the contempt case, is implemented.

Immunity is a shield, not sword

Aitzaz also said that the court could question presidential immunity but he will not argue on it in this case. “Article 248 (2) is a shield rather than a sword,” Aitzaz said, referring to the clause on immunity for an incumbent during his stay in office.

Justice Mulk, however, said that the contempt notice is associated with the immunity, “so there would be no need for carrying on with the contempt case if the government proves immunity for the president.”

Aitzaz replied that it is not mandatory to satisfy the court regarding Article 248 during the preliminary hearing since the president was not under discussion.

“If you can convince us, then we will withdraw our notice; otherwise, we will frame charges against the prime minister,” the court observed, adding that Articles 189 and 190 of the Constitution compelled all to obey the court orders.

The court also inquired about the law secretary, who was supposed to provide important documents to the court. Attorney General Maulvi Anwarul Haq said that he will apprise the court about the secretary’s whereabouts later. However, he endorsed Aitzaz’s stance that the required documents have already been submitted before the bench.

The court adjourned the hearing till Thursday (today) and ordered Aitzaz to conclude his arguments by then.