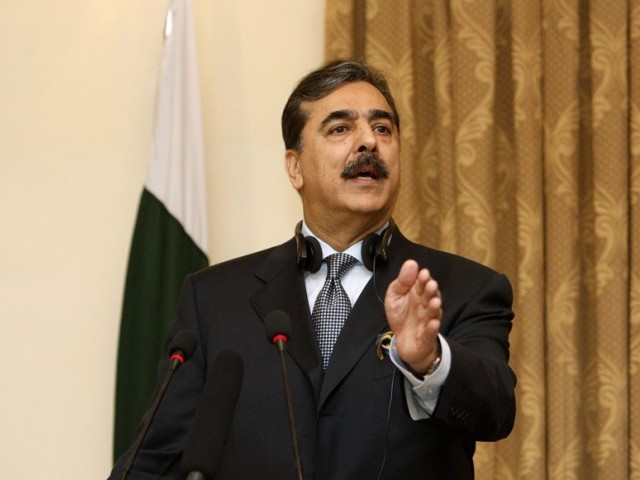 Gilani says that it was the prerogative of the Chief Executive to call for elections. PHOTO: REUTERS/FILE

ISLAMABAD: Prime Minister Syed Yousaf Raza Gilani on Tuesday said that the new Chief Election Commissioner (CEC) would be appointed in consensus with all political parties, as the Pakistan Peoples Party (PPP) wanted to ensure free, fair and transparent general elections in the country.

“The Chief Election Commissioner will be appointed in consensus with all the political parties after the retirement of the incumbent CEC, as we did in the case of the appointment of members of Election Commission,” Gilani said while responding to the queries of callers from general public in a live “Prime Minister Online” television programme, co-hosted by Pakistan Television and Dunya TV.

Prime Minister Gilani assured that free, fair and transparent general elections will be held in the country, with smooth transition of power in line with democratic norms.

“I want to assure that there would be free, fair and transparent elections. This would be the first government, when there would be a smooth transition (of power),” Gilani said while responding to the queries of callers from general public in the live “Prime Minister Online” television programme.

He said Pakistan Peoples Party (PPP) was not a ‘one-timer’ party, as it had come into power by contesting elections, adding, “we want transparent elections.”

To a question about speculations and statement regarding the dates and timing of the next general elections, Gilani said unlike the past where article 58-2b existed, governments and assemblies with two-third majority were dissolved unconstitutionally, it was now the Prime Minister’s prerogative to call elections.

Gilani, however, added that after Senate elections are held in February-March and the new budget is presented in May, the government would sit with the opposition to discuss the general elections.

“This would be the first government, when there would be a smooth transition (of power),” he said.

He said Pakistan Peoples Party will form an election alliance with Pakistan Muslim League(Q) which will make them very strong in many constituencies.

To a question about the proposed 20th Constitutional Amendment and the issue of new provinces, the Prime Minister said, the agenda of the National Assembly session, commencing on Wednesday, would pertain to by-elections, as the Supreme Courts wants the nod of Parliament, adding, “We are evolving consensus in this respect.”

With regards to new provinces, he said that that matter too will be brought before the parliament and resolved by building consensus, he said.

About Seraiki province, the Prime Minister said, Seraiki area had a history, as Multan used to be a part of Sindh, adding, if the issue was taken up jointly by the coalition partners and consensus was reached, he did not see any problem for creation of Seraiki province.

Extensions to army chief ‘give’ not ‘asked’

Chief of Army Staff Ashfaq Parvez Kayani did not want an extension but Gilani requested him to continue so too was the ISI chief, the Prime Minister revealed.

He said it was the Chief Executive’s prerogative to decide on granting extensions to the military chiefs.

To a question, the Prime Minister said Pakistan will support any Afghan-led and Afghan-owned effort for stability.

“Naturally, we are stakeholders and on the Afghan issue we will be consulted,” he said adding Foreign Minister Hina Rabbani Khar will be visiting Afghanistan on Wednesday where she will meet the Afghan President.

He said his government had begun the “3D” policy of Dialogue, Development and Deterrence to stop militancy. This policy, Gilani said, the world had agreed with Pakistan upon.

The Prime Minister said legislation will be introduced in the parliament which would ensure that militants and subversive elements do not escape punishment.

Parliament to formulate policy on relations with US, NATO

He clarified that the government never allowed Drone attacks and now the nation and parliament will decide on relations with the US and NATO.

The parliament will also decide about the steps that should be taken if there is violations of its resolutions on drone attacks, he added.

The Prime Minister said the government abolished the 100 year old Frontier Crimes Regulation (FCR) and extended the party system to the tribal areas.

“Now we are focusing on development projects, infrastructure, education and improvement of socio-economic conditions of people of tribal areas,” he added.

He said the Pakistan Peoples Party will go to the people for votes on the basis of its performance.

New CEC to be appointed after consensus: PM