Bringing the focus back to East: Kashmir should be focal point of foreign policy: Fazl

Bringing the focus back to East: Kashmir should be focal point of foreign policy: Fazl

JUI-F chief calls for shifti­ng the focus from Afghan­istan back to Kashmi­r.
By Qamar Zaman
Published: January 31, 2012
Tweet Email 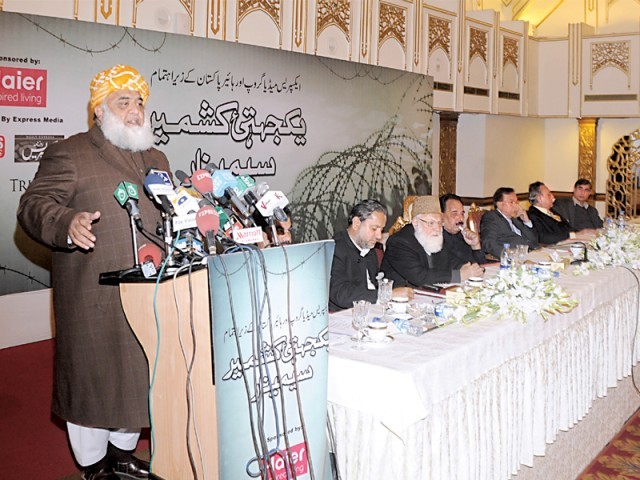 Addressing a seminar organised by the Express Media group to show solidarity with the Kashmiris, Rehman said, “Pakistan’s foreign policy should be Kashmir-centric rather than focusing on Afghanistan”. We have been engaged in Afghanistan for the last three decades which has put the Kashmir issue on the back burner, he said.

He came down heavily on the government over its topsy-turvy stance with regard to country’s foreign policy saying, “It is true that we have blocked Nato’s supply route, got Shamsi air base vacated and boycotted the Bonn conference but we do not know whether these steps are temporary or long-lasting features of our foreign policy.”

He said that the country has lost over $70 billion and sacrificed 40,000 lives in the war against terrorism, which has been going on for the past 10 years now.

“What have we gotten in return, he asked, adding, India on the other hand has emerged as an economic power in this time frame.

The JUI-F chief lamented the attitude of people at the helm of affairs for not pursuing the cause of Kashmiris in the past 64 years and said all we need is a focused approach. “I am bewildered to find both the government and opposition seem helpless in taking decisions and the country has been turned into a security state,” he said.

Former chief of Jamat-e-Islami Qazi Hussain Ahmed underlined the need of a national policy and pursuing a meaningful dialogue with India for resolution of the Kashmir issue. “Every leader in Pakistan seems to be projecting his own version of the solution. India on the other hand is united on the view that Kashmir is their integral part,” he added.

He said that Kashmir is an unfinished part of subcontinent’s division and our first demand from India should have to be their acceptance of Kashmir as a disputed territory.

Meanwhile, Prime Minister Azad Jammu and Kashmir Chaudhry Abdul Majeed paid homage to the Pakistani leaders saying that “despite the difficult times, Pakistani leaders and people have never compromised on their stance on Kashmir.”

Former Prime Minister AJK Sardar Attique Ahmed Khan grilled the government for a lack of policy saying “we have nothing but adhocism”. Referring to the government’s decision to grant the Most Favoured Nation (MFN) status to India, Khan said that the government’s policy is a confused one; on one hand the government observes black day against the Indian atrocities in Kashmir on the other they are willing to make them the most-favored nation.

He suggested that chairman Kashmir committee for a peaceful gathering of country’s leadership at Chakoti to give a message of peace and express solidarity with Kashmiris.

Federal Minister for Kashmir Affairs Mian Manzoor Wattoo said that the government was committed to Kashmir cause and would not accept any solution prescribed without consultation of Kashmiris.

He said India and Pakistan are nuclear powers and cannot afford any war. Therefore there is a need for a result-oriented dialogue.

Former foreign minister Khursheed Mehmood Kasuri said that the government in Pakistan cannot compromise on three issues: Nuclear program, Kashmir and relations with China.  “If not resolved, the issue of Kashmir can de-stabilise both India and Pakistan,” he warned while saying India cannot subjugate Kashmiris for long.