JuD chief says journa­lists, as Pakist­anis, should use the opport­unity to defend the countr­y.
By Our Correspondent
Published: January 30, 2012
Tweet Email 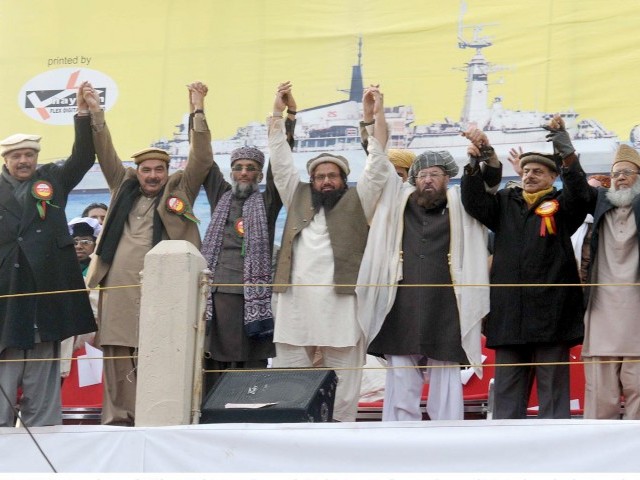 Leaders of Difa-i-Pakistan Council join hands during a rally at Liaqat Bagh in Rawalpindi on January 22, 2012. PHOTO: INP/FILE

MULTAN: Joining in the chorus of Jamaat-i-Islami and Jamiat Ulema-e-Islam Fazl, the Jamaatud Dawa has also chastised the media for ‘inadequate’ coverage of its events and activities.

“Media should consider it a duty to provide coverage to events of JuD and Difa-i-Pakistan Council,” Hafiz Saeed, chief of the religious charity organisation, said on Monday.

He was speaking to reporters in Multan after attending a rally organised by the council on Sunday.

“They [journalists] are part of Pakistan and must defend the country. They can do it in this way,” he said.

Speaking about the council’s ideology and aims, he said that through the council, the JuD aims to unite people from Peshawar to Karachi under one umbrella to protest US aggression in Pakistan. “It is regrettable that religious scholars do not highlight this teaching of the Shariah that greatness lies in unity,” he said, adding that the Difa-i-Pakistan Council’s next gathering in Karachi will be the biggest rally in Pakistan’s history.

Sapna Khan case: Next hearing to take place on February 3