Slackn­ess from local author­ities has led to the deteri­oratio­n of the 500-year-old fort.
By AH Nizami
Published: January 29, 2012
Tweet Email 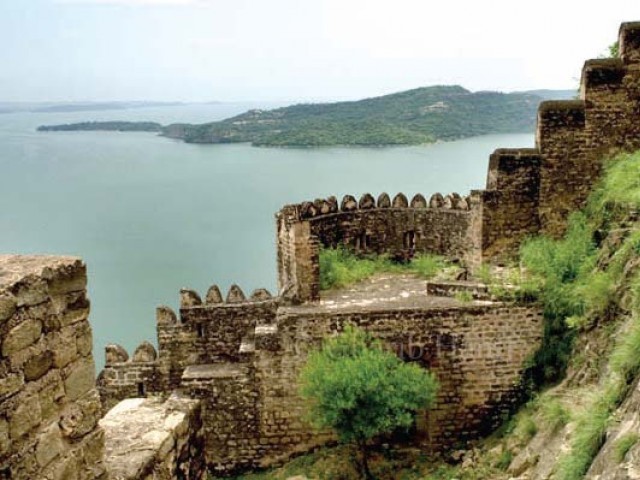 The centuries-old fort has not been maintained. PHOTO: FILE

Despite tall claims by the concerned authorities, especially the Azad Jammu and Kashmir Tourism Department, which is responsible for maintaining the condition of such historic places, Ramkot Fort today feels like an abode for ghosts.

Large funds are included in the annual budget of the AJK Tourism Department, but this has not translated into a tangible difference in the condition of historic structures.

Picturesquely located on the summit of a hill, Ramkot Fort is built over the site of an old Hindu temple on the banks of the Mangla dam lake. Three sides of the hilltop are surrounded by the Jhelum River, which falls into the huge reservoir of Mangla Dam.

After excavation, relics from the 5th and 9th centuries have been discovered near one of the temples. In the 16th and 17th centuries, the Muslim rulers of Kashmir had built numerous forts, one of which is Ramkot. The Sikh Maharaja of Kashmir further fortified Ramkot – and today it should be as appealing as a Scottish castle.

In the 1990s, a dentist from Rawalpindi voluntarily spent hundreds of thousands of rupees trying to revive Ramkot Fort, but his efforts were in vain due to a lack of cooperation and interest from local authorities.

The tourism secretary in the AJK government, Dr Shehla Waqar, told The Express Tribune that her organisation is actively engaged in improving the condition of Ramkot Fort and also the historic Red Fort in Muzaffarabad. She said the archaeology department of Hazara University had been asked to lend its services to preserve the structures and make them attractive to tourists.

Others are more cynical about what has been done to protect the old structures.

Ramzan Dutt, a lawyer and campaigner for site preservation, believes that the AJK authorities have simply not done enough to promote tourism in the area.

Dutt said his organisation has presented a comprehensive proposal for looking after historic sites to the AJK authorities, with no response. He added that, especially since it is the ancestral home of many British-Pakistanis, Mirpur could be turned into an economic hub through the promotion of the tourism industry.

Shoaib Mirza, a visiting UK-based Kashmiri expatriate, said that hundreds of thousands of British-Kashmiri tourists would want to visit the area if it was developed properly. He urged authorities to make places such as Ramkot Fort pleasurable for visitors.

Jehanzeb Amin Khan, an unemployed youth, said that AJK is blessed with natural potential, and that authorities should capitalise on this to create tourism jobs in the area.

Progressive measures: AJK police to be made a vibrant force