Dogfighting in Pakistan is alive and kicking

Dogfighting in Pakistan is alive and kicking 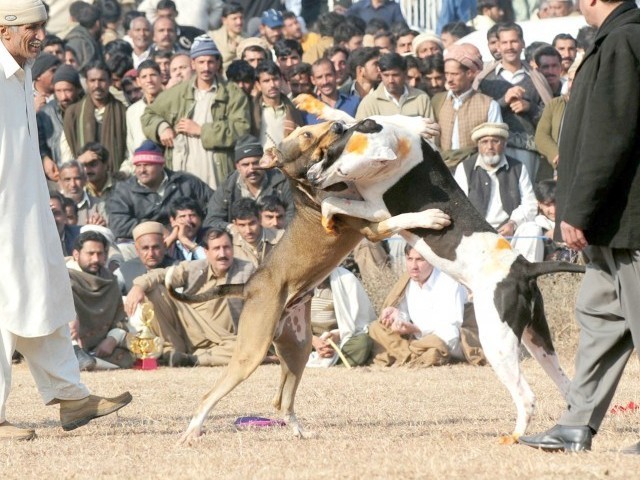 MIRPUR: Across the world, Sunday afternoons are reserved for leisurely activities. A stroll in the park, lunch with friends, a read through the newspapers.

Things are slightly different in the village of Sangoat, off the Mirpur bypass road. On Sunday the village held its ‘Awami Maila Kuttoon Ka Dangel’, roughly translated as a public fair of dogfighting.

Dozens of dogs were brought by their owners from far-flung areas across Azad Jammu and Kashmir and Punjab. The dogs are specially trained to, quite simply, try to kill each other.

Predictably, several dogs were severely injured after a succession of brutal, bloody fights.

Curiously, the event was organised largely by British nationals. Among those who put it together are Chaudhry Meherban, Mumtaz Akhter, Rashid Mahmood and Baba Raheem. The vicious spectacle was also attended by local political personality Chaudhry Sultan Mahmood.

Millions of rupees were apparently at stake for the owners of winning dogs.

Hundreds of spectators showed up, including those apparently betting on the contest, which began in the morning and lasted the whole day.

Besides the local lads, visiting Kashmiri-origin British youth have also taken a keen interest in the deadly contests. A visiting 19-year-old, Rehan Maqsood Mirza, told The Express Tribune that “although it is an admitted fact that it is cruel sport, it gives an attractive source of entertainment to the fans – especially the youngsters.”

Rehan, a student at Manchester University, said that groups of youngsters upload dogfights on YouTube.

Another Kashmir-born British national who is a noted social worker for the Kashmiri diaspora in the city of Oldham, Hafiz Maqsood Jiraal, said that the parents of British-Pakistani youth are, unfortunately, great followers of dogfighting.

The situation is not hopeless. Jiraal said that various social welfare organisations, including those in the British Muslim community, have campaigned for an end to this sport worldwide.

On Sunday, several fights took place. In each one the dogs attacked each other ruthlessly, as the mob watched on with a mixture of glee, amusement and indifference. Later on, the owners of the dogs declared triumphant by the judges were awarded various prizes, including cups and shields. The spectators clapped with gusto.

Afterwards, spectators told reporters that dogfighting is an ancient practice in Mirpur, going back centuries.

They were also under the impression that dogfights were legal – whereas in fact they are illegal in Pakistan. One can’t blame them for their perception. Law enforcement authorities do almost nothing to discourage dogfights in the country.

According to Fakhar Abbas, who has previously worked with the World Society for the Protection of Animals, the Pakistan Prevention of Cruelty to Animals Act – which dates all the way back to 1890 – is now supposed to be enforced by the government’s wildlife department, which in turn comes under the department of livestock.

Funds for tackling animal fights in the department, Abbas says, have long since dried up, and the law is therefore allowed to be violated across the country. Along with dogfights and bear-baiting, even camel fights are a source of entertainment to some in Pakistan.

A slideshow of pictures from a dog fight can be viewed here.